This page discusses the dis-assembly of the Hydrolec Unit. Please see the Hydrdrolec rebuild page for the re-assembly process. The original page became to big with 42 photos and text!! It took forever to load.

The Freshwater hydraulic turbo-generating set was made by the Hydrolec Division of Leroy Somers, in Granby Quebec, in the mid 1980s. Hydrolec went out of business in 1989. One has to be inventive to obtain spare/replacement parts.

The way the blades are actuated is quite clever. This unit, including the generator, sits submerged in the water column. The blades are actuated by the use of a large return spring and a Firestone industrial air bag. The generator rotor, planetary speed increaser and inner workings of the Kaplan hub are all immersed in pressurized oil. As the oil pressure is increased, the Firestone air bag, on the end of the machine, expands outward and pushes the cross head plate outwards. This pulls the turnbuckles, attached to the ends of the blade trunion, bell cranks, which rotates all four blades equally. As the pressure in the bulb is decreased, a large spring pushes the crosshead plate back in and reverses the rotation. Due to the pressurized oil, in the generator and blade hub, careful consideration is given to sealing the machine, to prevent oil from entering the environment. The main shaft is sealed with a low profile, mechanical/spring bed and carbon contact, surface seal. The blades and rotating parts are sealed with neoprene o-rings. 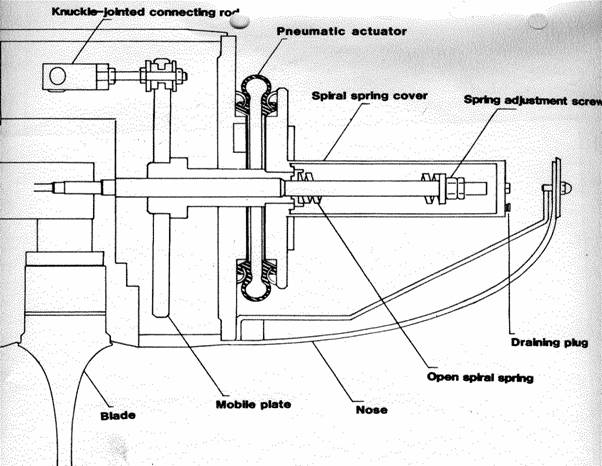 As we disassembled the unit, we found numerous problems. The generator stator windings were burned out. The Firestone airbag, that actuates the runner blades, was rotten. The mechanical oil seal was worn out. The large conical roller bearings were bad. The oil lines were rotted. The planet needle bearings, of the planetary speed increaser, were corroded. The blade trunion wear sleeves were chrome plated. The chrome was worn out where the rubber o-ring seals had rotated and abraded the chrome surface with dirty water. The main shaft sealing surface was corroded.

All these issues were painstakingly resolved. 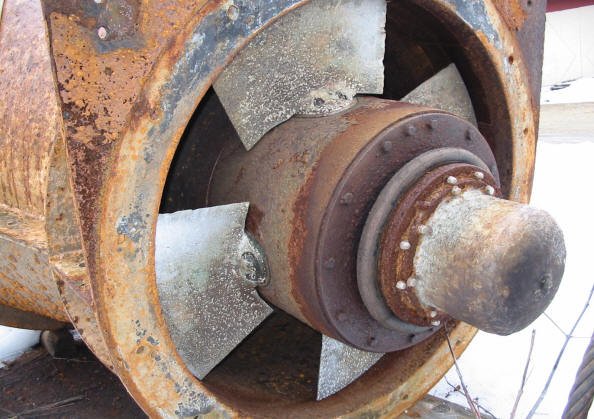 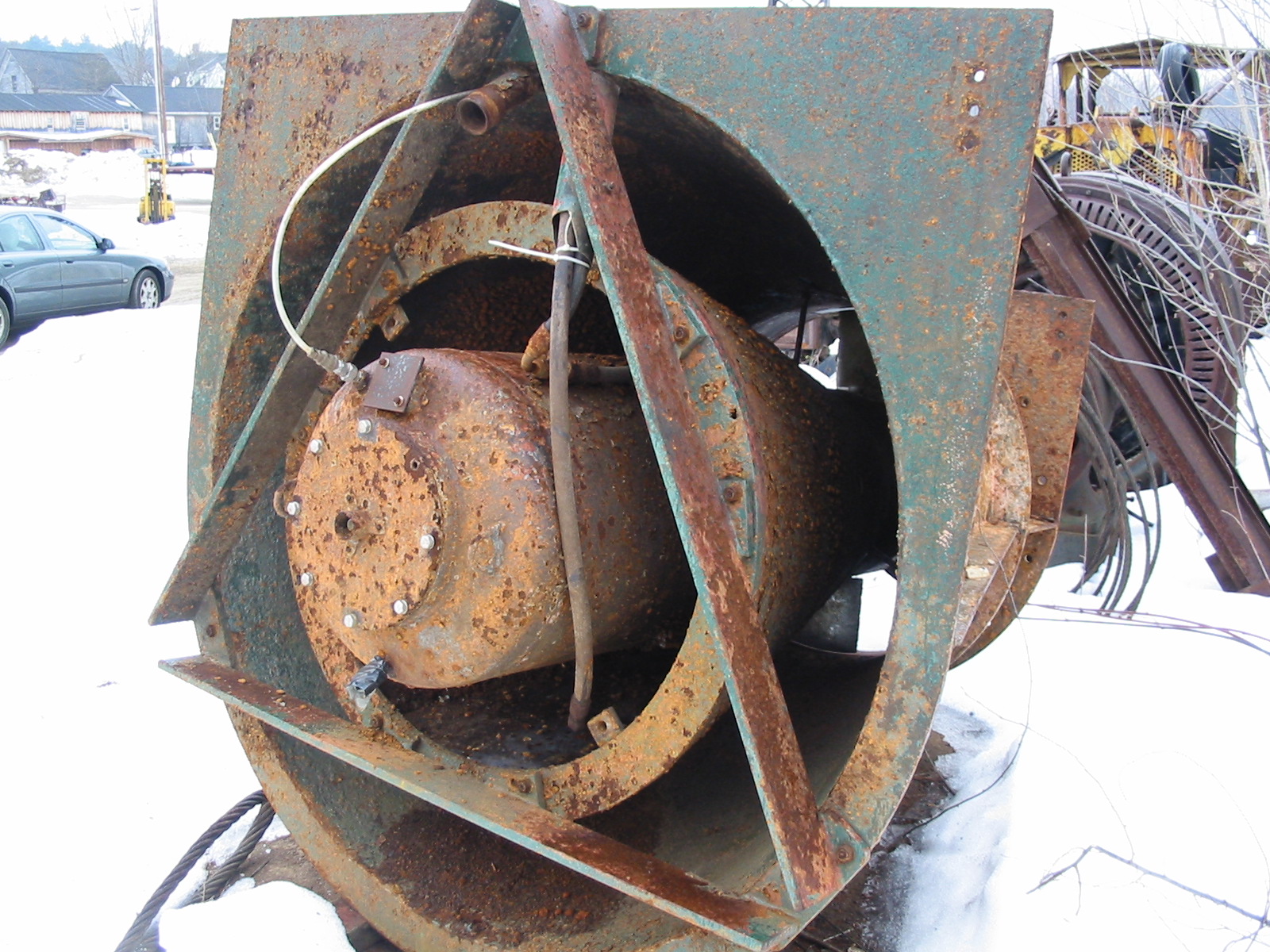 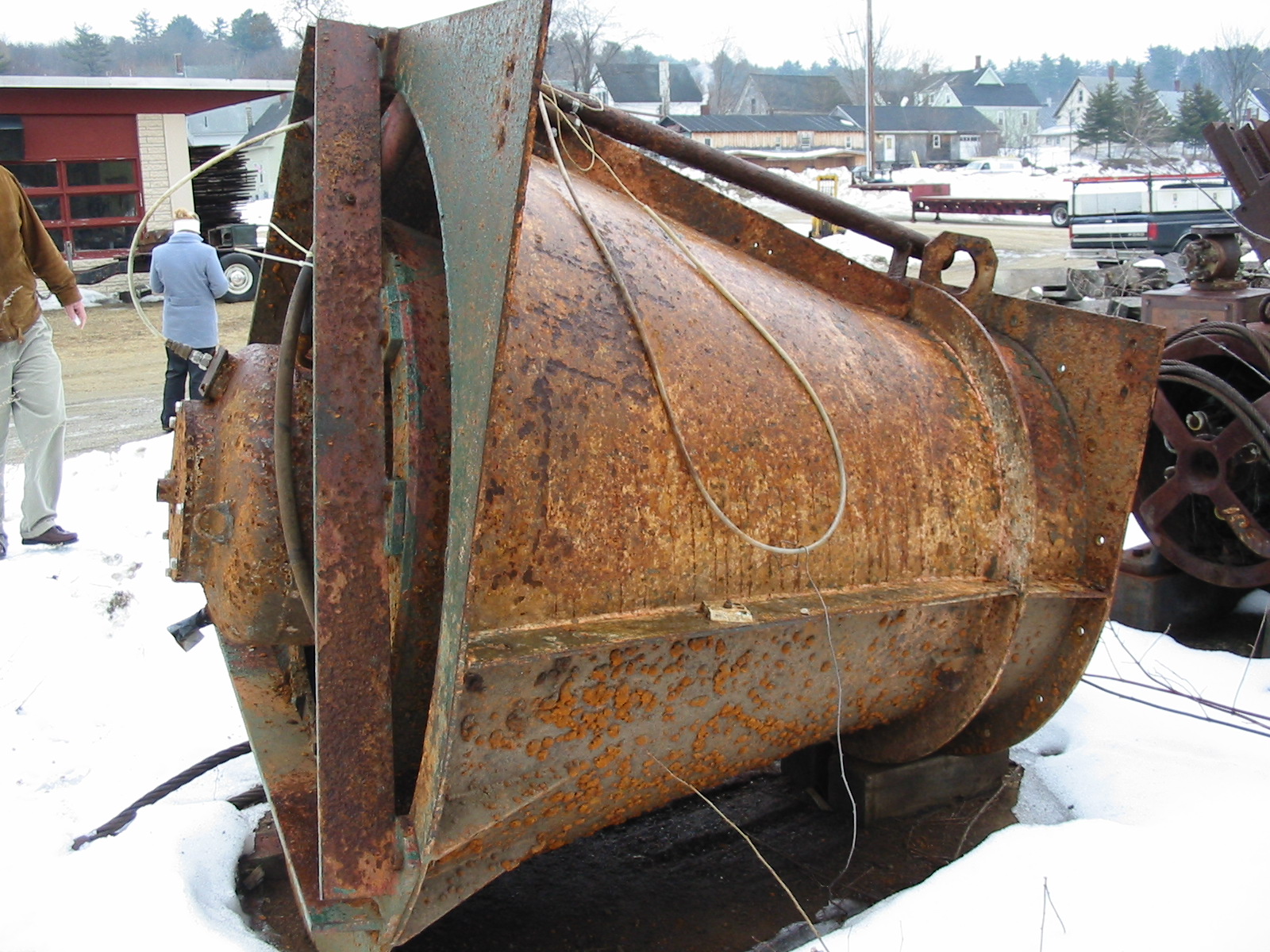 A longitudinal view of the bulb turbine. 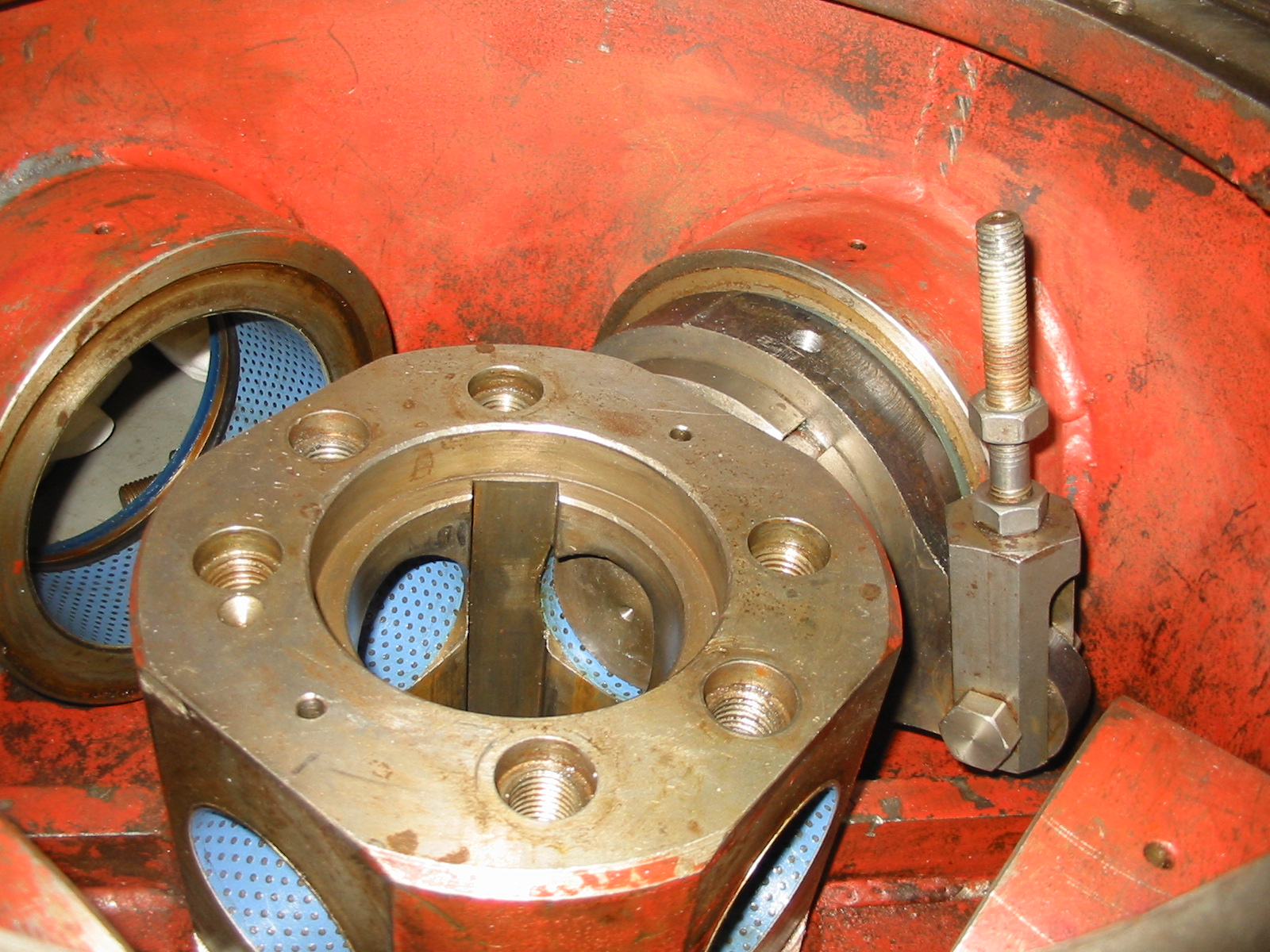 The inside of the hub. Note one blade is assembled and you can see the bell crank and tie rod. Note the Federal Mogul, Glycodur plastic journal bearings. Note the large neoprene o-ring and plastic grit ring. 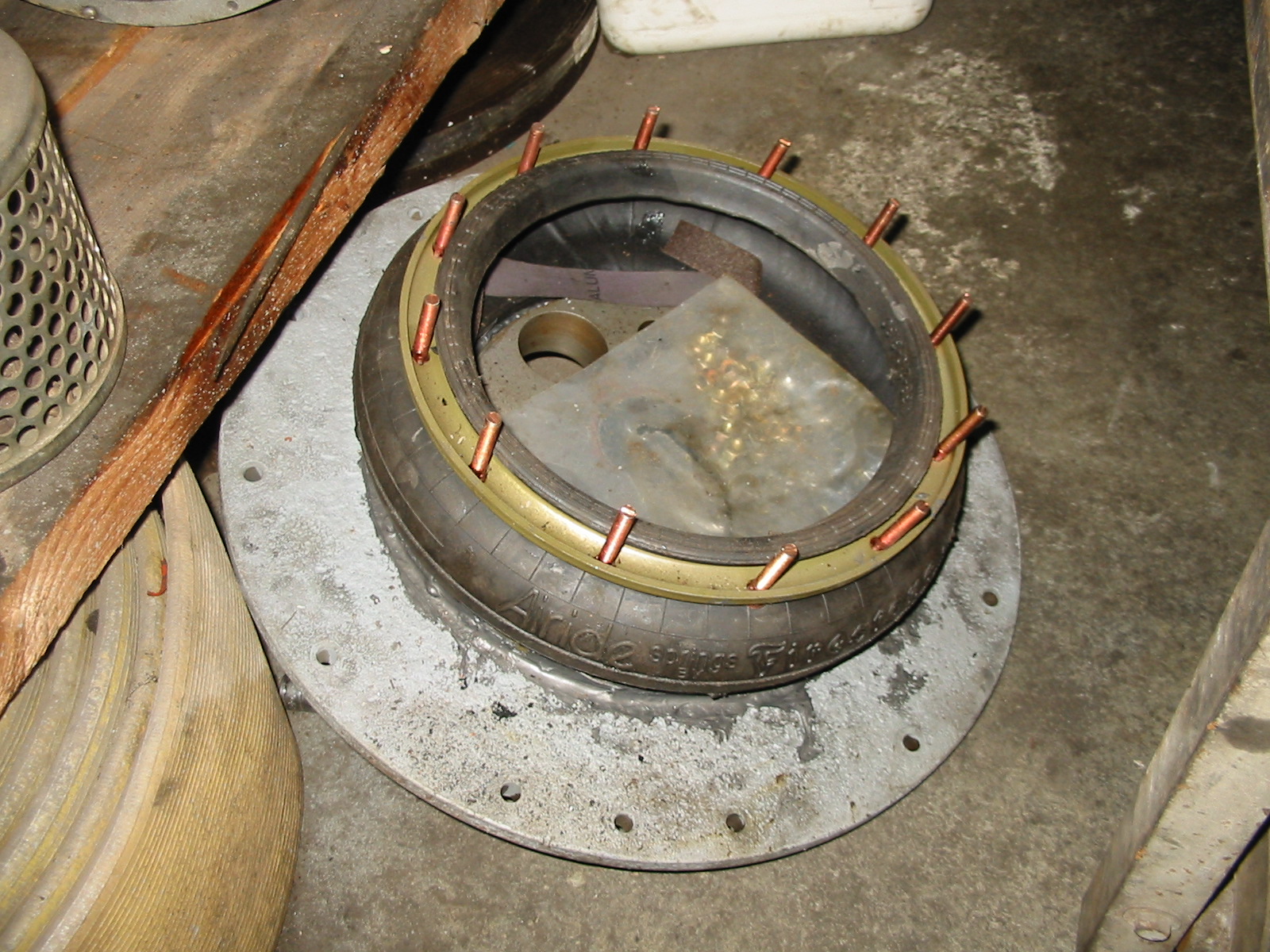 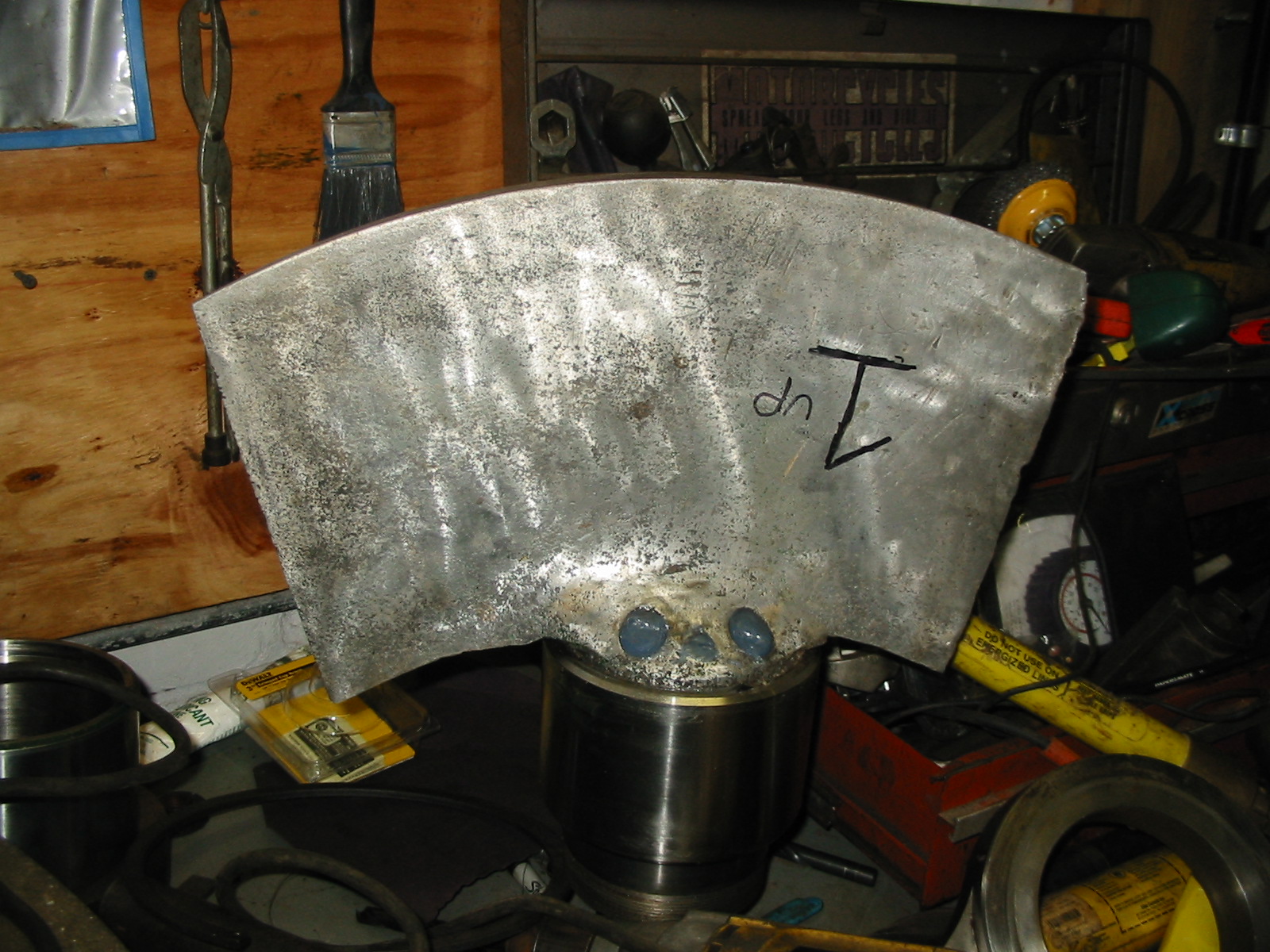 A typical blade. The shiny cylinder on the bottom of the blade is a replaceable wear sleeve that rotates in the Glycodur bearing. The original was chrome plated. The chrome was worn through where the sandy water lodged in the o-ring and abraded the chrome surface. We were going to grind the chrome off, re-chrome the surface and regrind the chrome. We finally purchased a solid bar of stainless steel. The Wizard turned four new sleeves out of the solid bar. 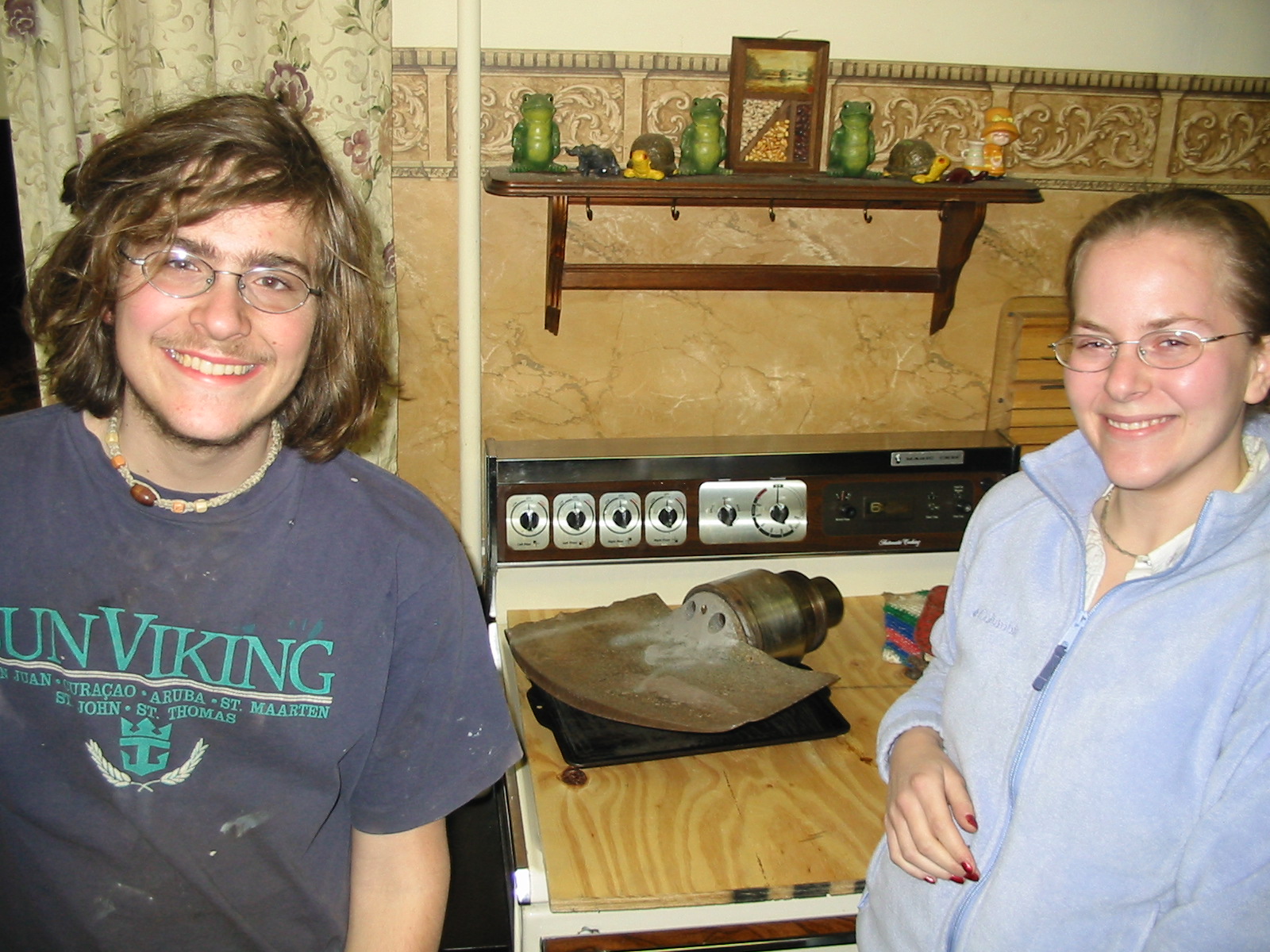 Co-conspirators!!! We needed to remove the old wear sleeve from the blade trunion. It was held on by LockTite. In order to remove it, we needed to heat the assembly up to 500 deg F. While Carol was teaching ballet, Celeste and Will snuck the blade into our kitchen. They put the blade in the electric stove and baked it at 500 deg F. I think they may have told Carol that they were baking brownies!!! The high temperature broke the bond and we were able to remove the sleeve. 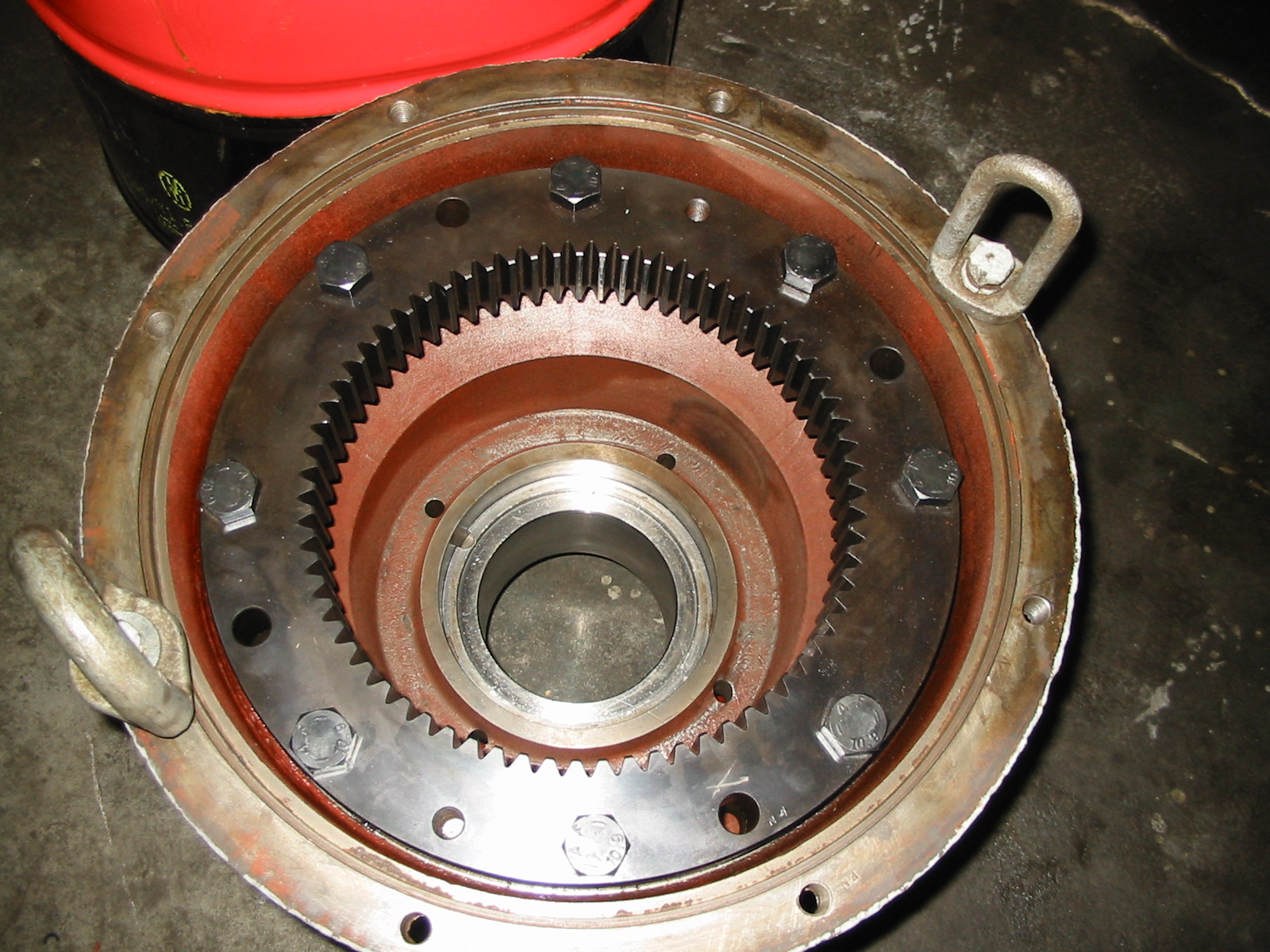 Looking down into the planetary gear housing The ring gear is still installed. 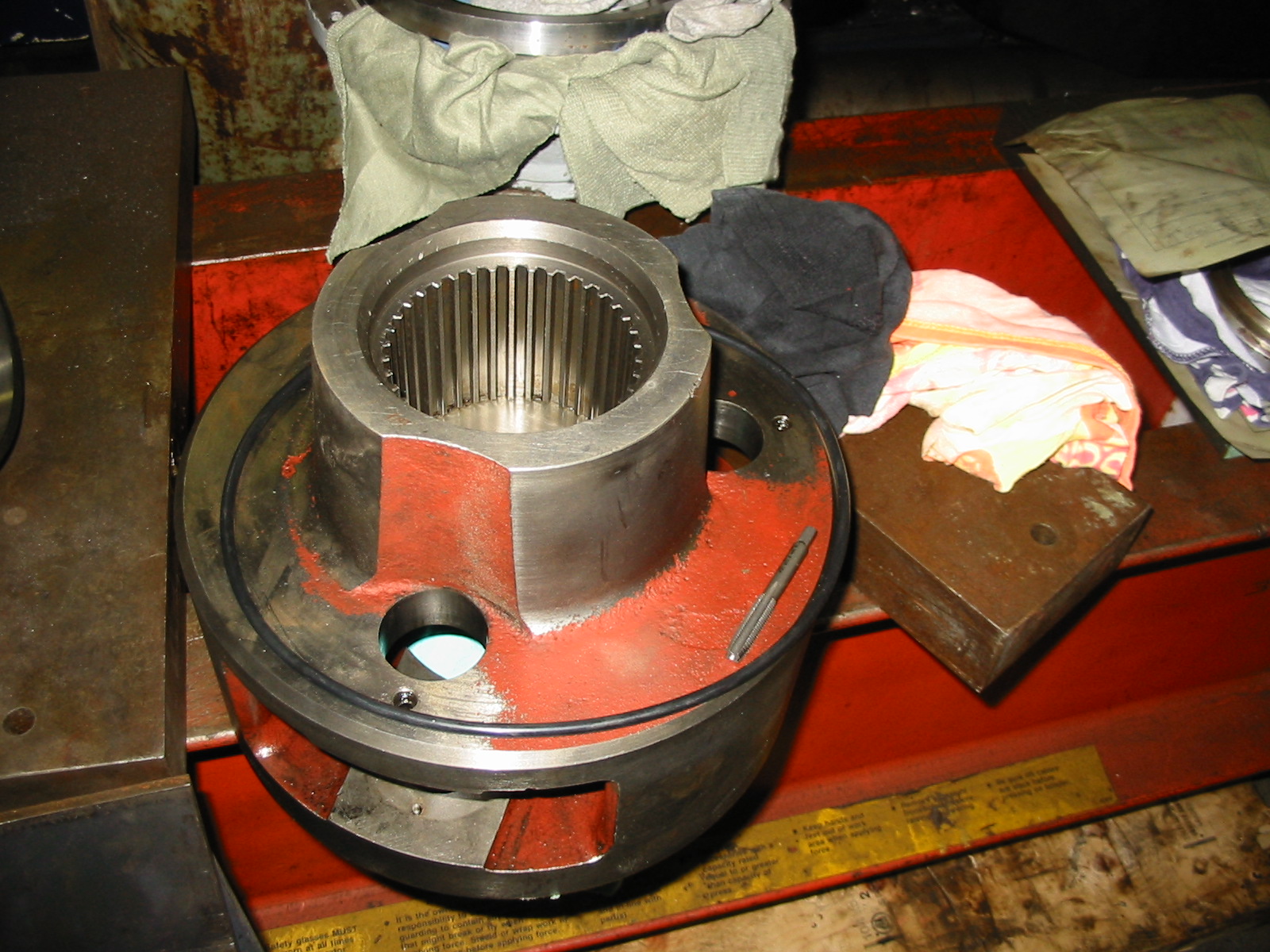 The planet carrier with the planets removed. The Torrington Division of Timken Bearing Company said they could make the new needles. The catch was, we needed to order 3000 needles, at $3.00 each. We thought $ 9000.00 for 75 rollers was a little steep. We noticed that Torrington listed the surface hardness and finish at 60 Rockwell and 25 microns. We found hardened dowel pins sold by Fastenal Company. The pins were listed at 72 Rockwell and 30 microns. The 75 pins cost      $28.00. We installed the dowel pins. 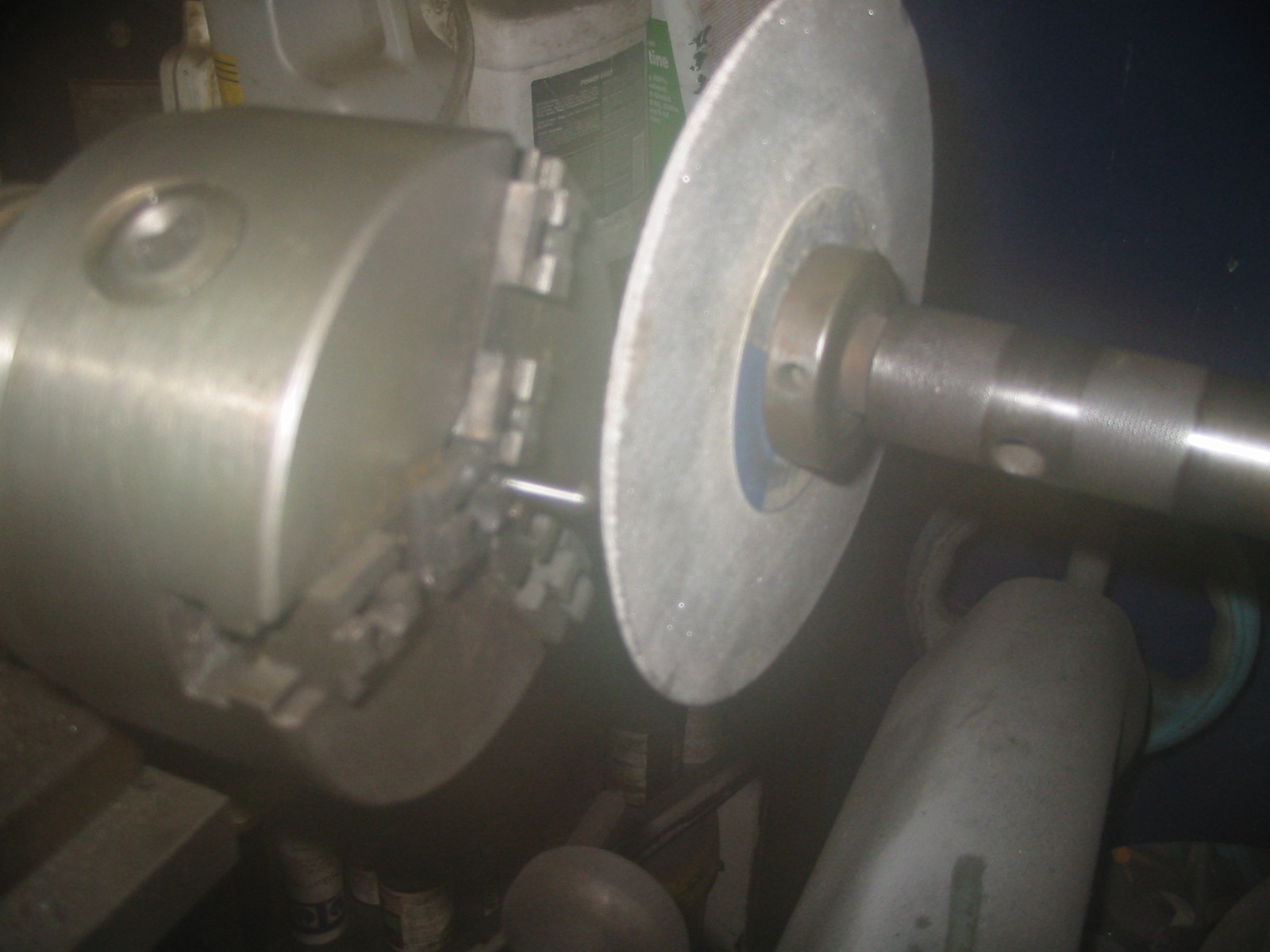 Grinding a replacement needle to the correct length 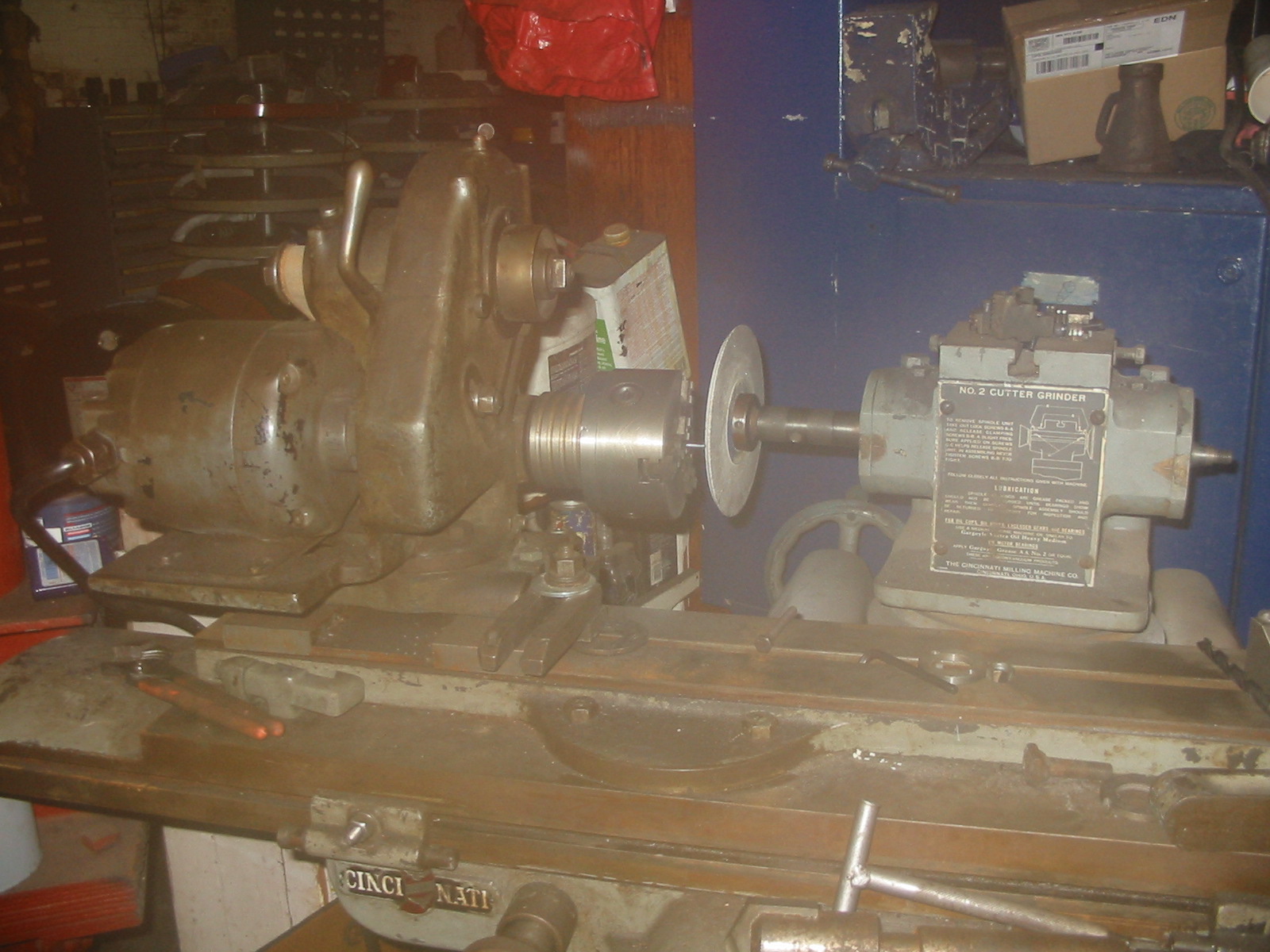 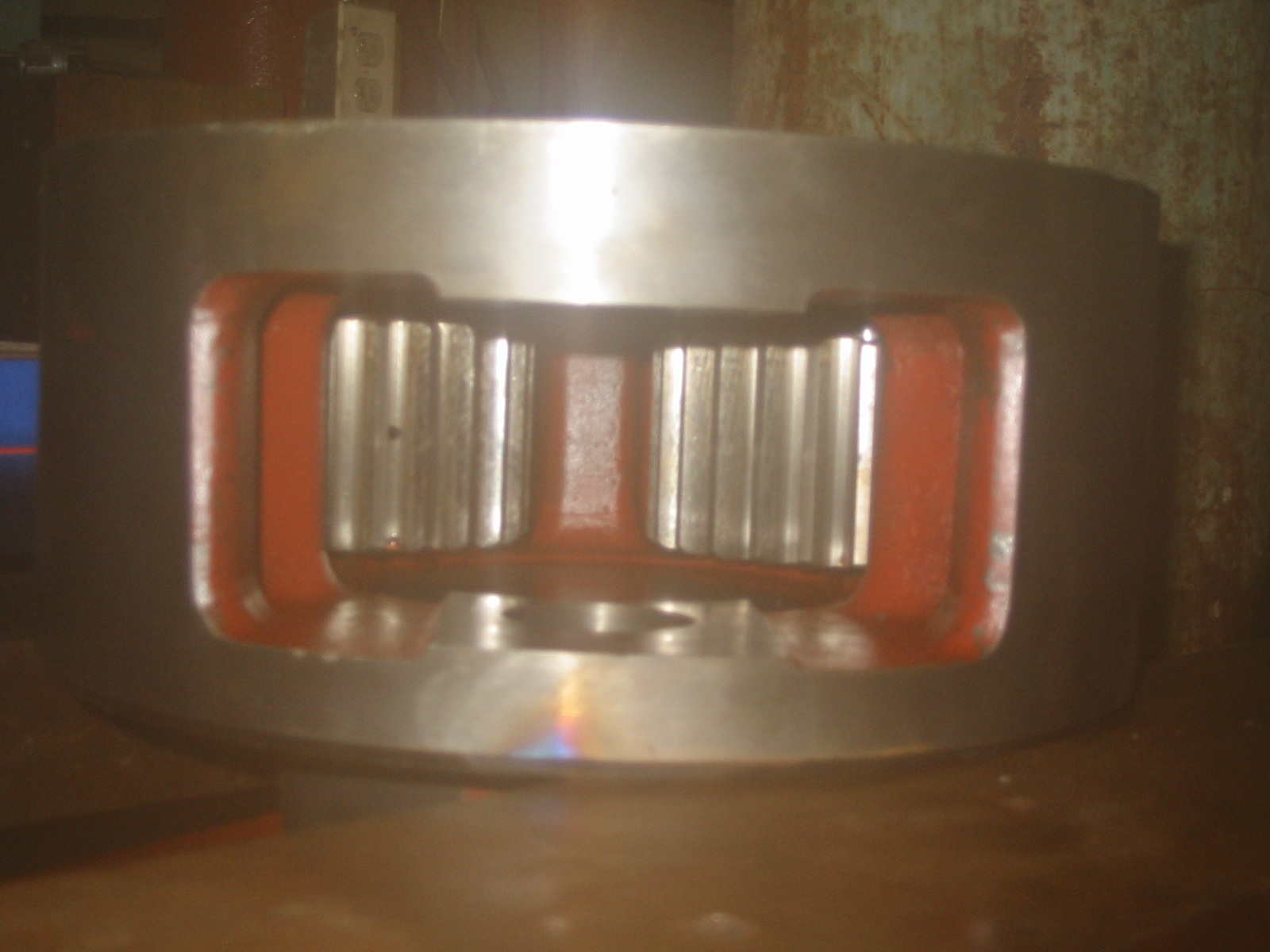 Partially assembled planetary housing carrier with two of the planets in place. 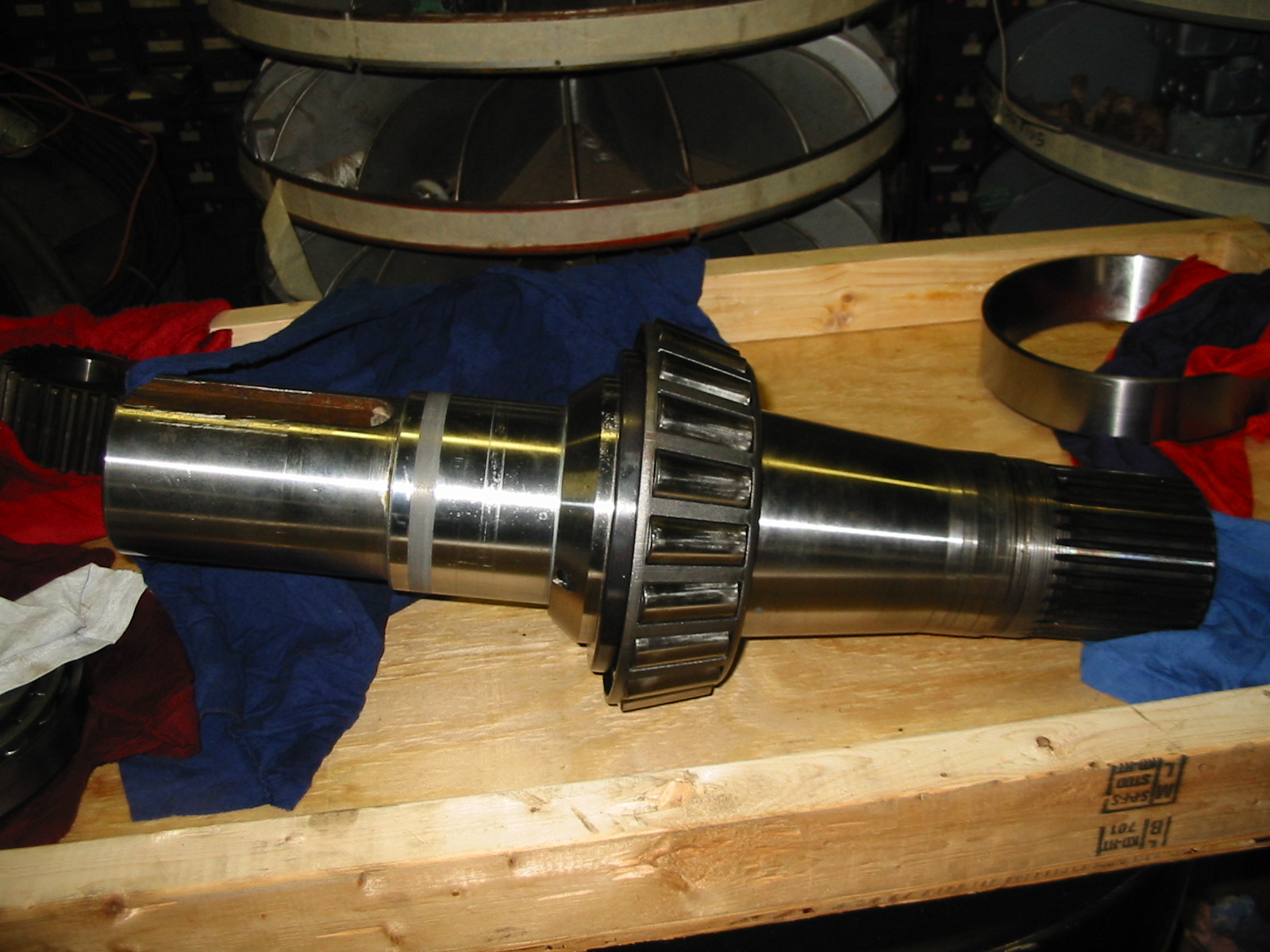 This is the main shaft of the speed increaser. The bearing is new. Note the grey band on the shaft. The shaft was worn at this location where the mechanical oil seal rode. The Wizard cut a dove tailed slot on the shaft. We packed it with Belzona, let it dry overnight and turned it down to the same main shaft diameter. The main bearing is a Consolidated FAG No. 32226. The upper radial bearing is an FAG 30221. 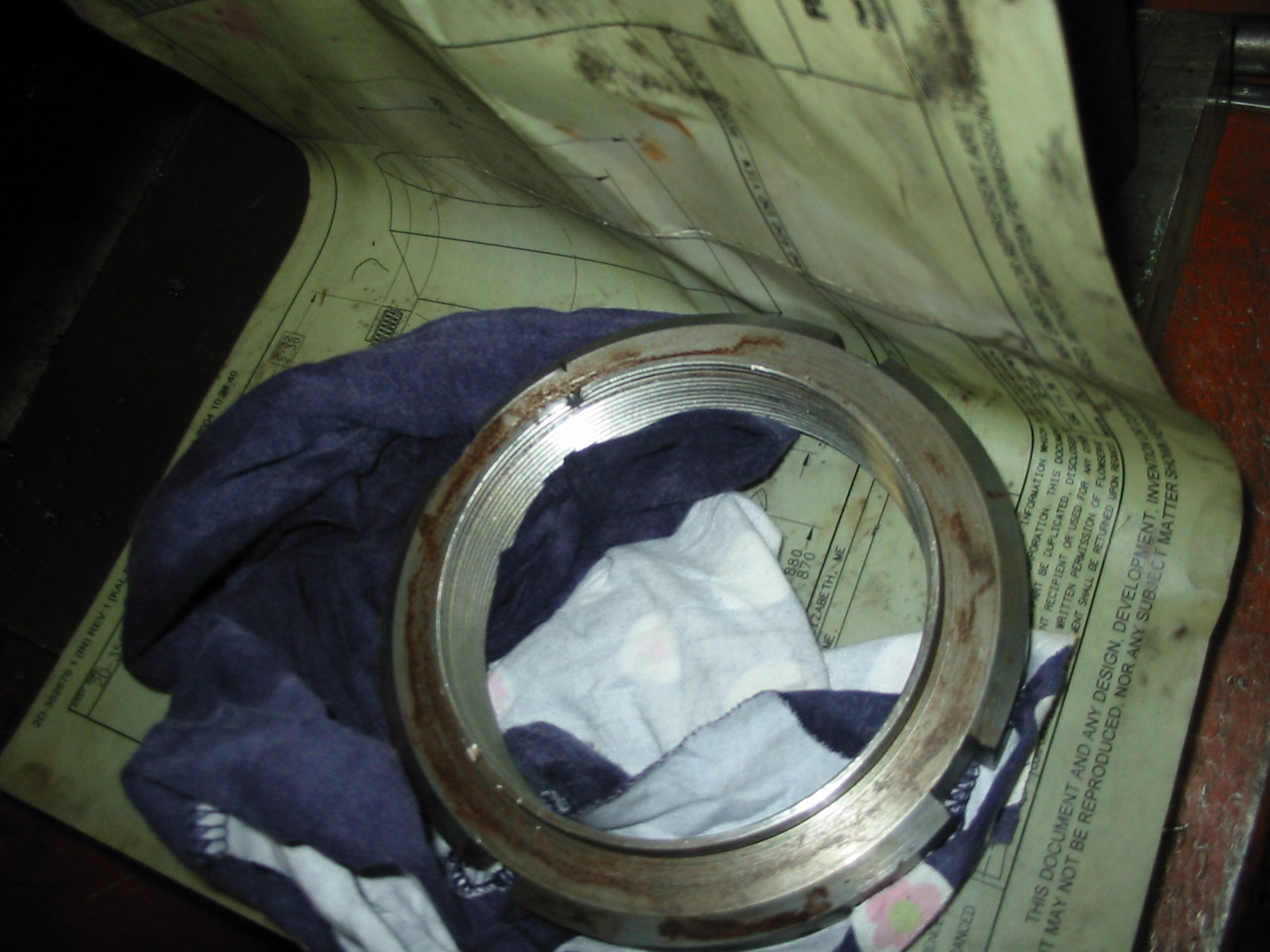 This is a Timken bearing nut. The original was Locktited on. We did not want to damage the shaft by heating it so we cut the nut off. The Wizard made a new nut. 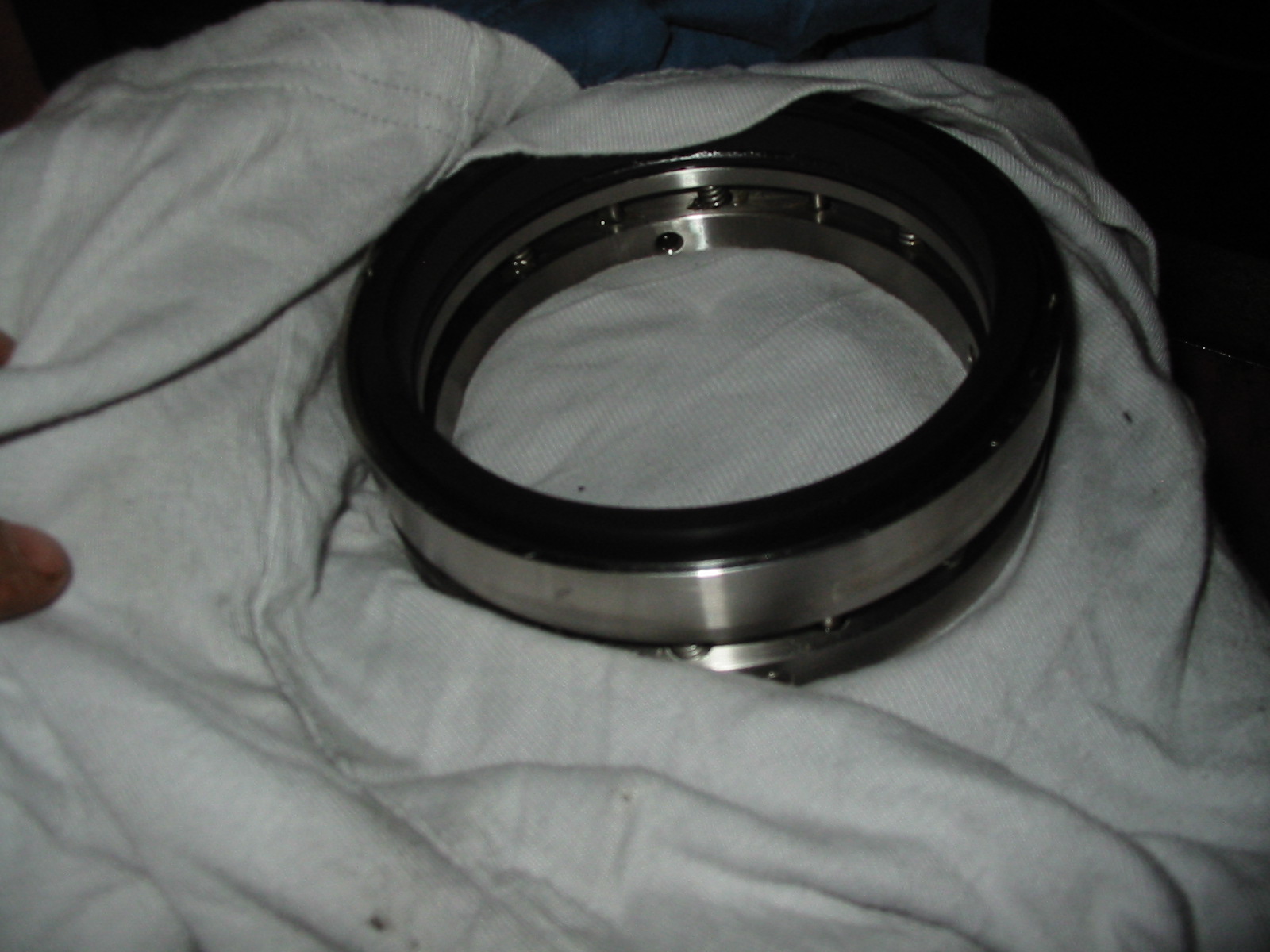 The original oil seal was a Hydrolec OEM. It is a special low profile seal. Andy Lemaider has several of these units running on the Royal River in Falmouth, Maine. He steered us to the FLOWSERVE Company, Fluid Sealing Company of Kalamazoo, MI who supplied us with a replacement seal shown here. It is a single inside BRO, B/M No. 354352, shaft size: 110 mm, seal size: 4.331, assembly drawing 2D-352679. Note the row of tiny compression springs that press this rotating component against the stationary carbon element (not shown). 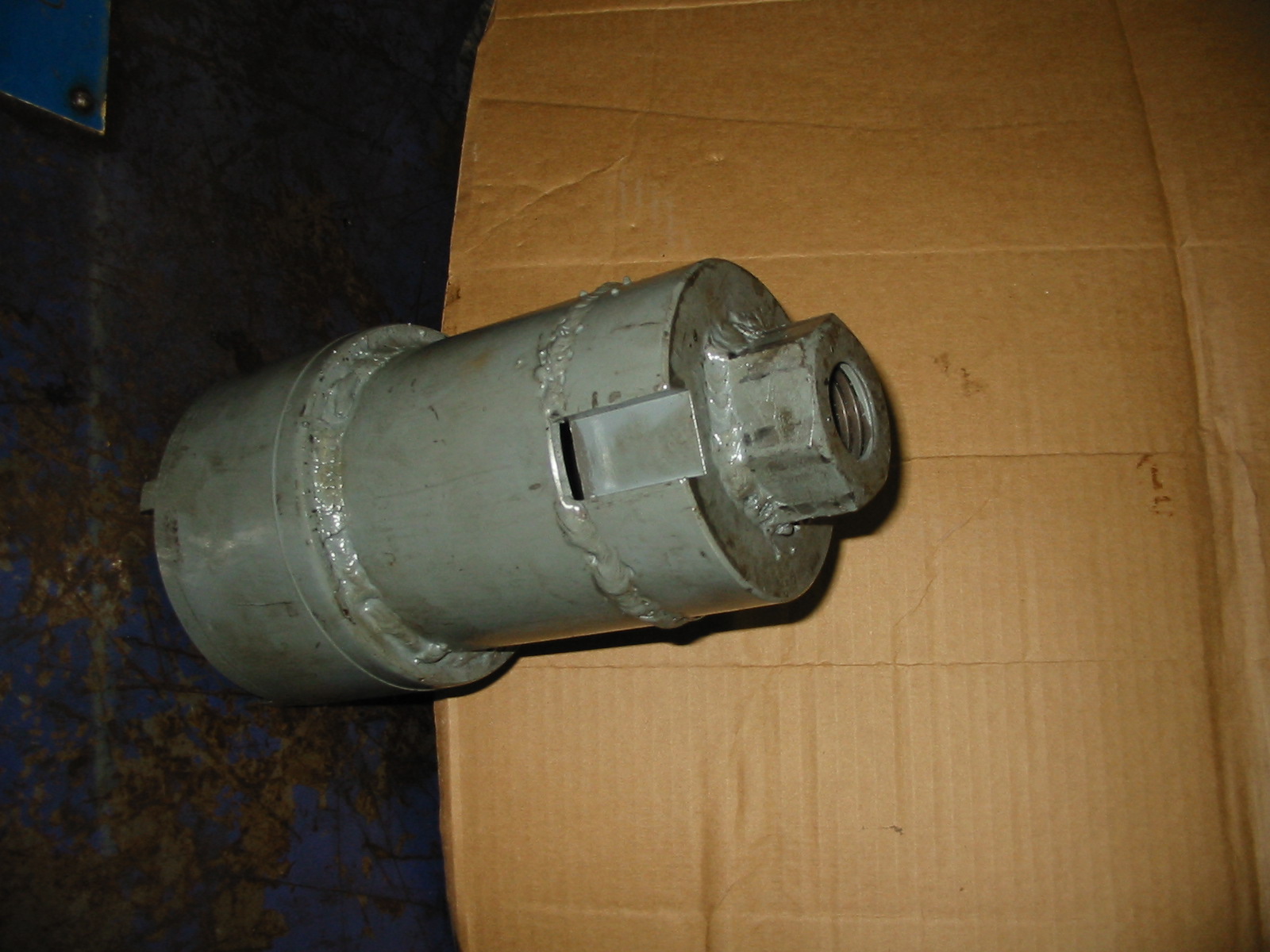 It was impossible to get a spanner wrench down into the gearbox case to take out the Timken nut. The Wizard said "no problem!!". He then made this tool to reach down inside the case and turn the nut off. Note one of the square tangs on the bottom left used to engage the square notches on the side of the bearing nut. Note the 1 1/4 inch diameter nut welded to the top of the tool, to turn it with a socket. 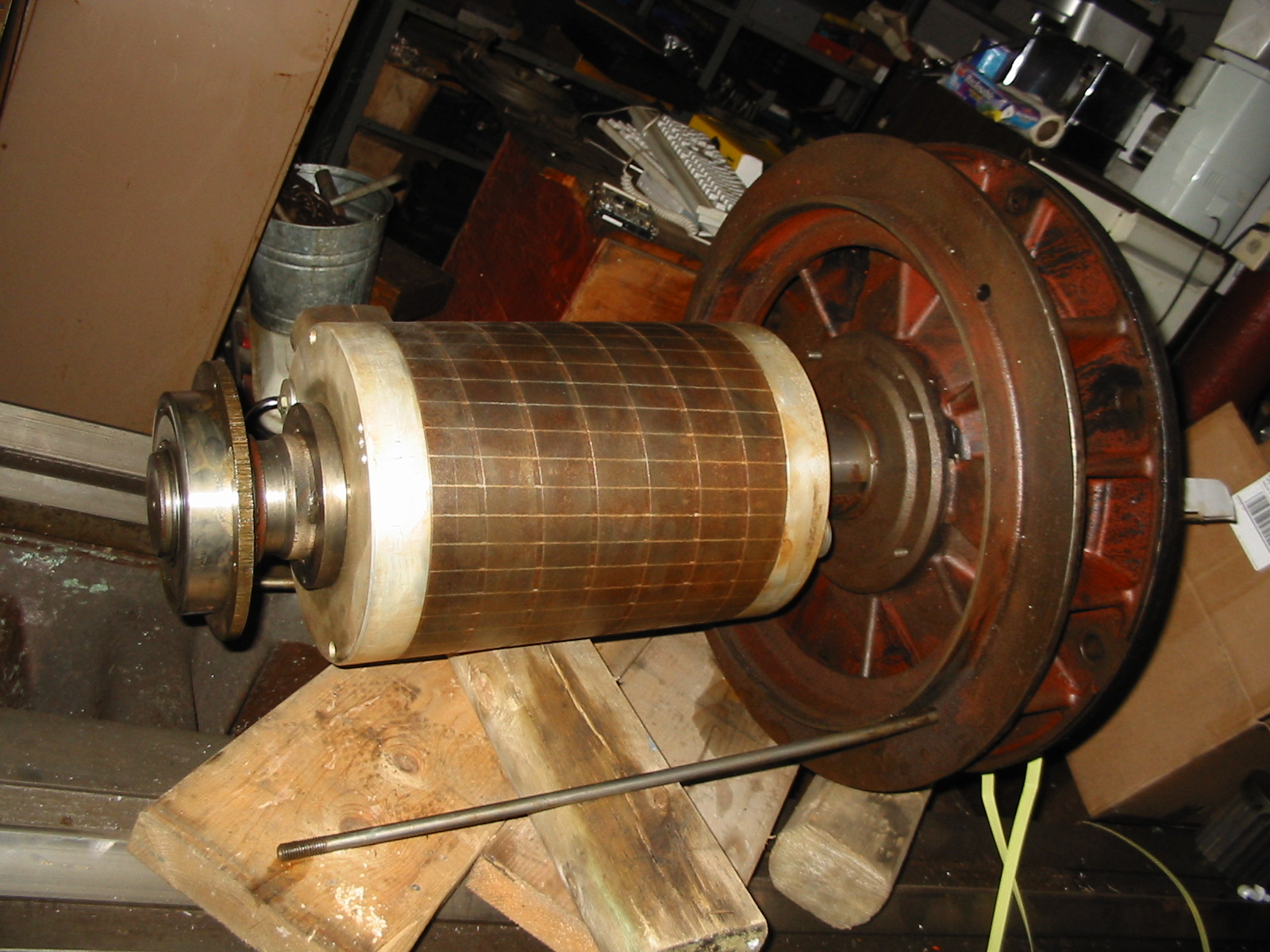 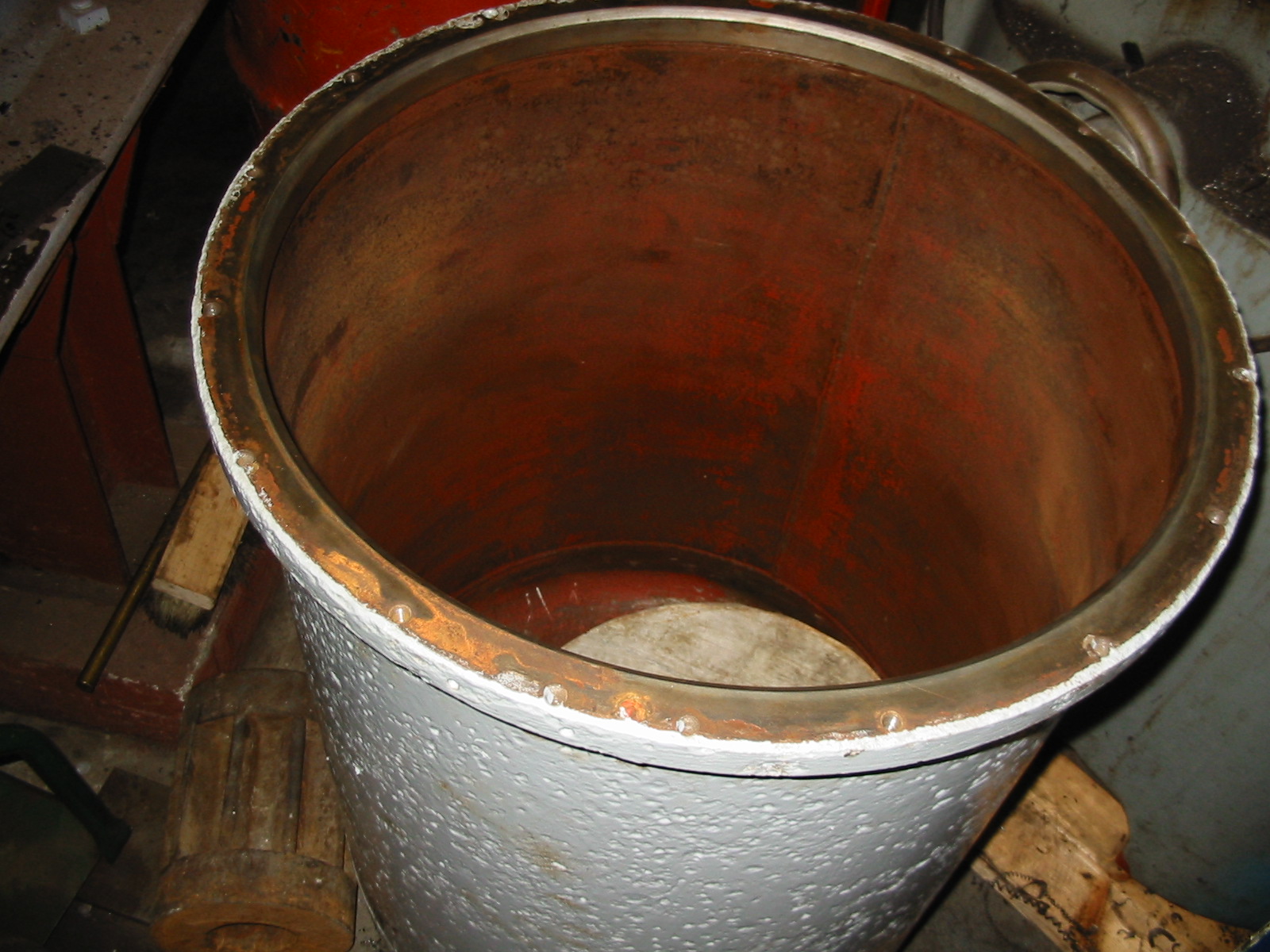 This is the heavy steel tank that houses the generator. It has been sandblasted and painted. Note the heavy corrosive pitting on its outside surface. 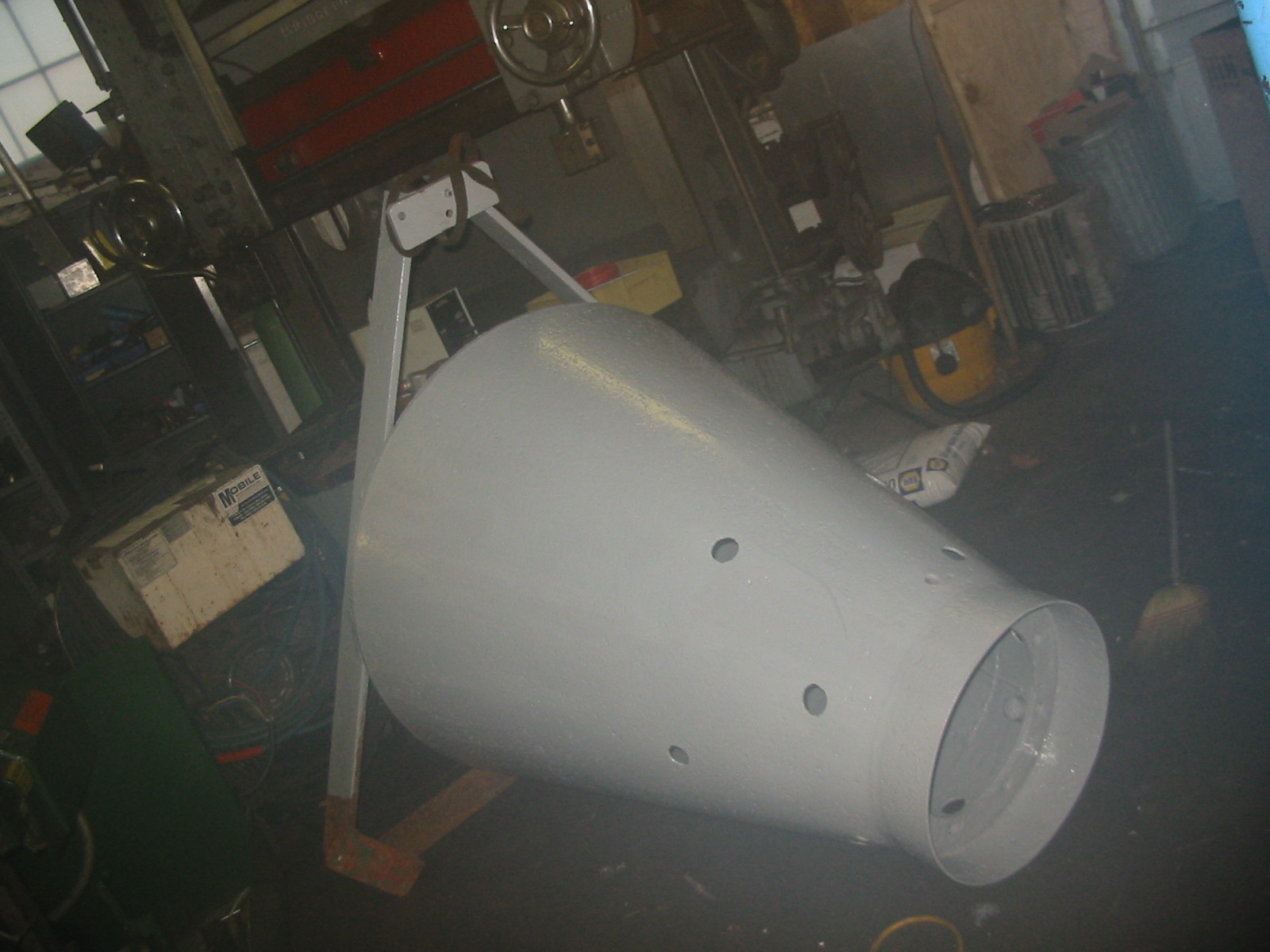 This is the inner cone. The generator/speed increaser assembly fits inside this cone. After the water flows through the propellor, it discharges through an annular draft tube. The annulus is formed by the outside of this cone and the inside of the larger, outer cone. Note the ten 2 inch diameter, torch cut holes in the surface. We think some one was trying to tighten a hydraulic fitting and cut the holes in order to find the fitting. They are allowing the vacuum on the downstream side of the runner to escape. We put heavy card board on the inside of each hole, traced the individual outline and cut out a template. We flame cut the rough outline of the plug out of 3/8 inch trashrack stock. We pasted the cardboard template on the rough piece and used the large bench grinder to trim the piece to an exact fit. We then welded all the pieces in place. 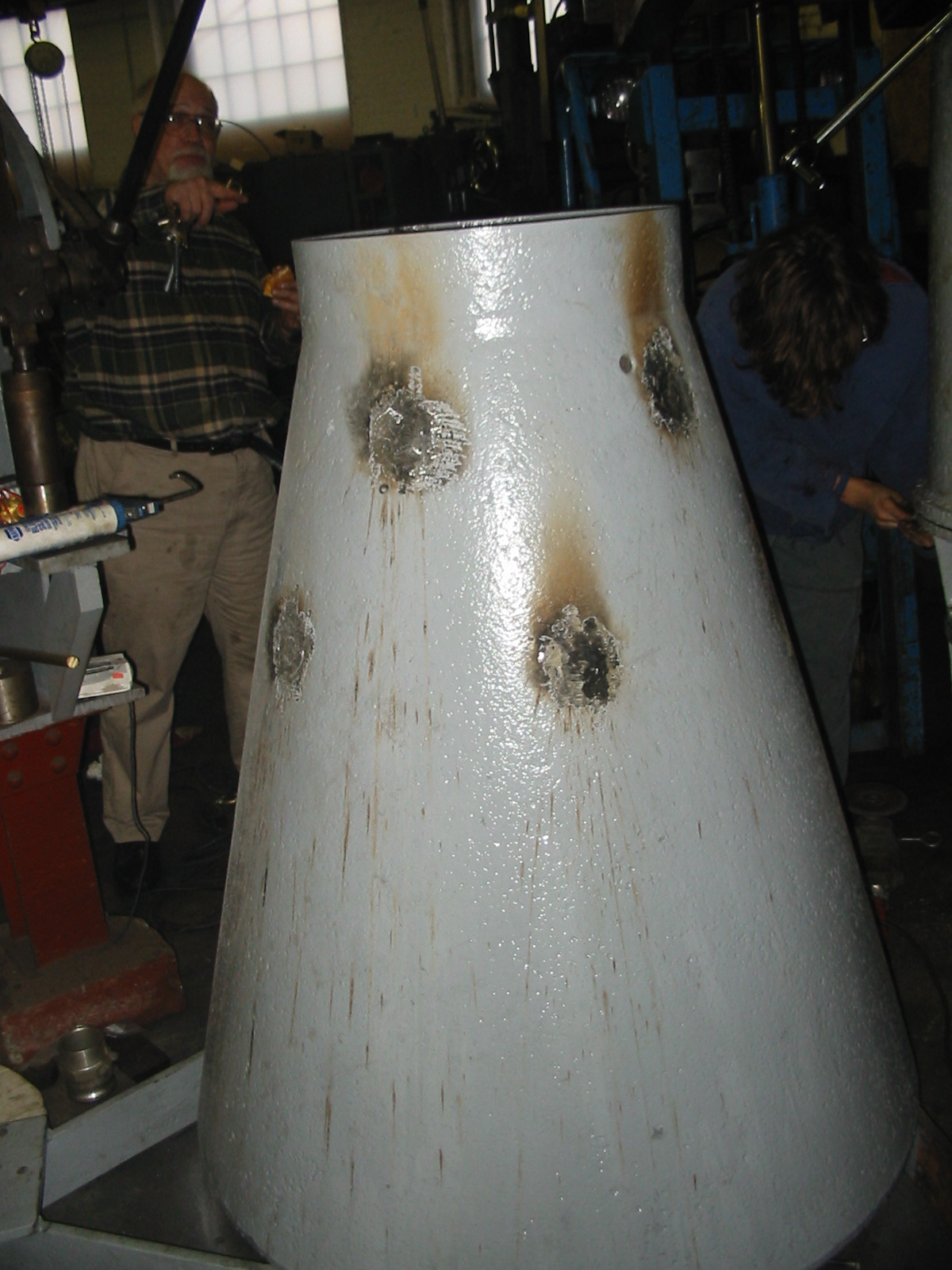 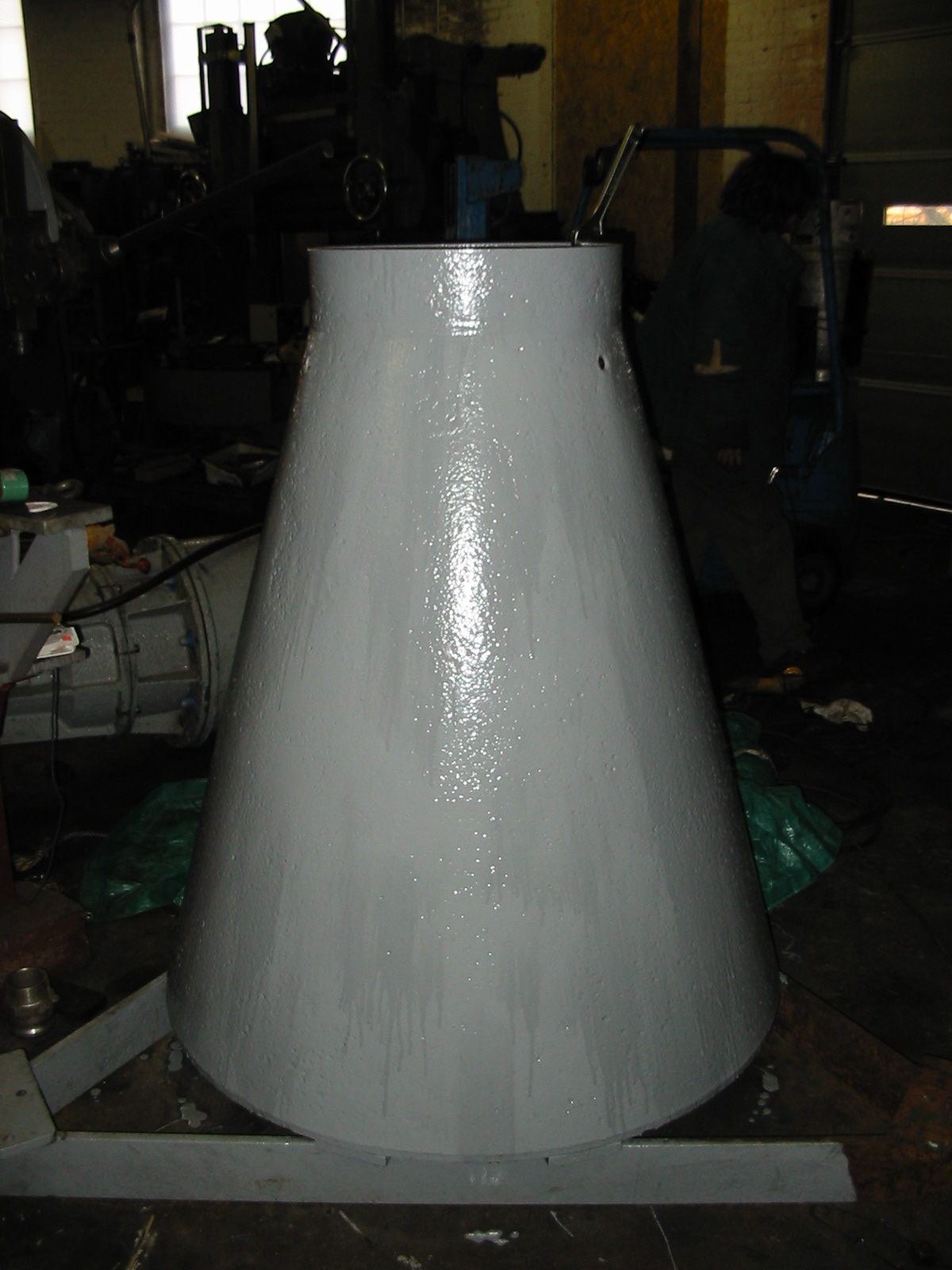 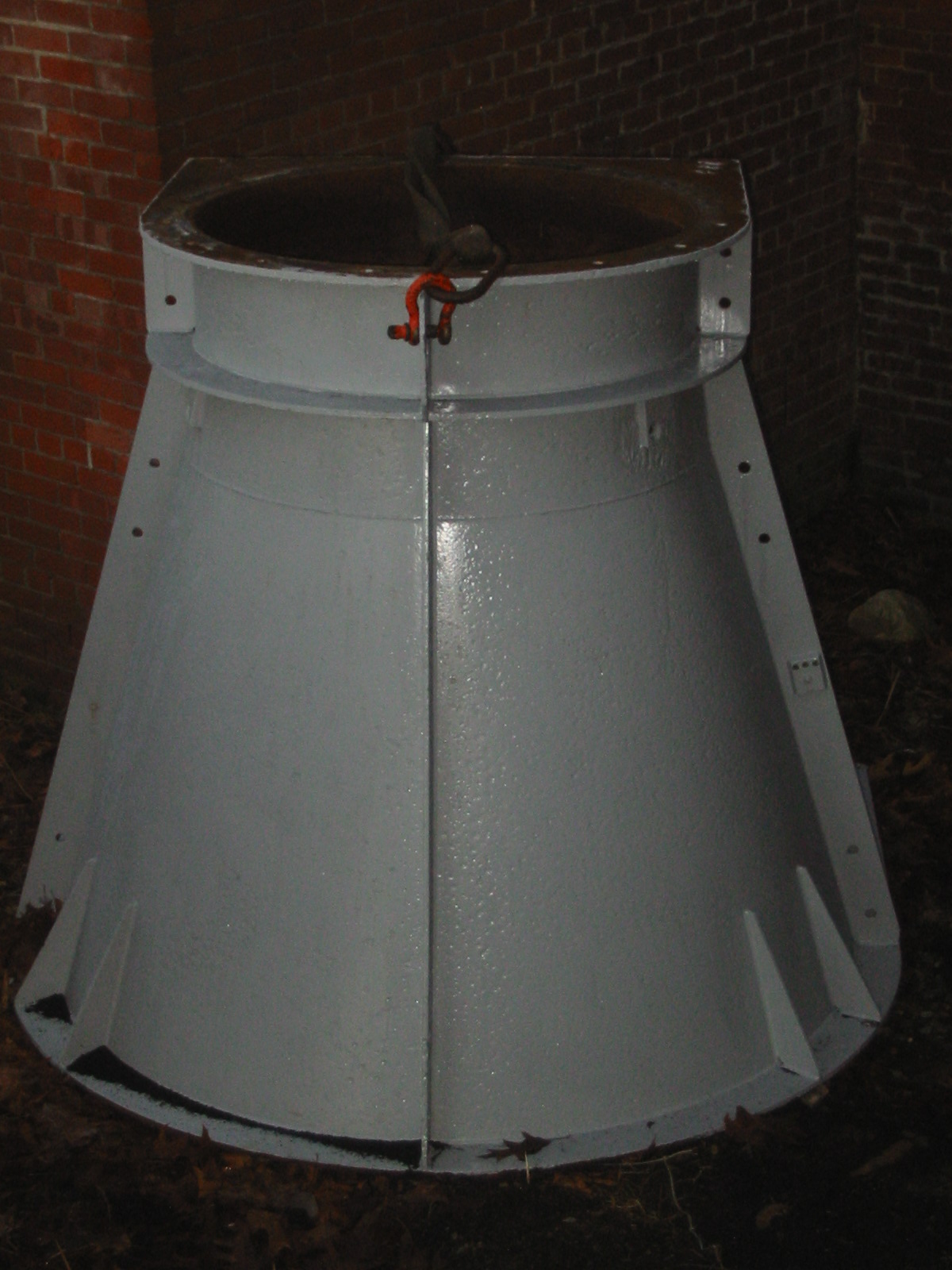 This is the outer cone. The inner cone is attached to this cone by an angle iron frame on the discharge end and three, tensioned, spokes on the propellor end.