Many of the larger manufacturers of hydraulic turbines such as I.P. Morris, Newport News Shipbuilding and Wellman Seaver Morgan incorporated a barrel stave bearing to oppose the radial forces on the turbine main shaft. This bearing had long, thin, dove tailed, lignum vitae strips that were inserted in a cylindrical, cast iron housing. Once the strips were all inserted into the housing, the housing was placed on a boring mill and the wooden surfaces of the strips were bored to the diameter of the main shaft. Provisions were made to pump water between the shaft and the wood to provide lubrication. Many operators do not realize that at certain gate settings a Francis runner will create a vacuum on the crown of the runner. This sucks the water out of the lignum vitae bearing and burns the wood up. In order to provide lubrication of the wooden surface a dependable water supply must be provided.

I first ran across this type of bearing at Consolidated Edison's Red Bridge Station. It is located on the Chicopee River in Wilbraham, MA. There are two 5 megawatt S. Morgan Smith units operating on 50 feet of head. We were called in to inspect Unit One because it was making load bumping noises. We found that the main shaft was quite loose. We could not find a way to adjust the bearing. It did not have a quarter block assembly with bronze adjusting screws. We removed the stuffing box and the wet end bearing. We found a barrel stave bearing that was worn out. We also discovered a very badly worn 13 inch diameter, main shaft. We created a split metal sleeve from a piece of pipe and welded it onto the damaged shaft. We installed new lignum vitae staves and reassembled the unit. 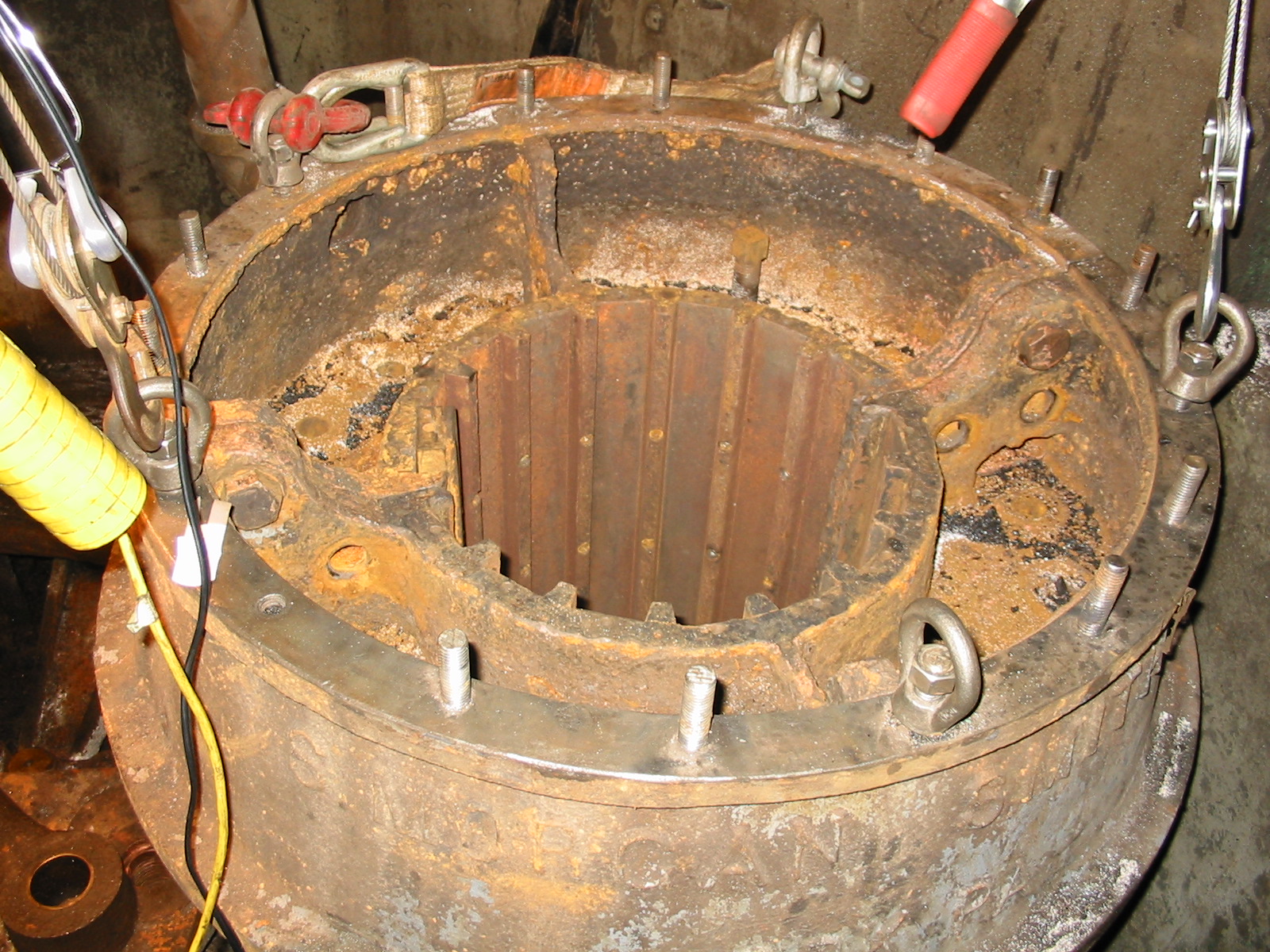 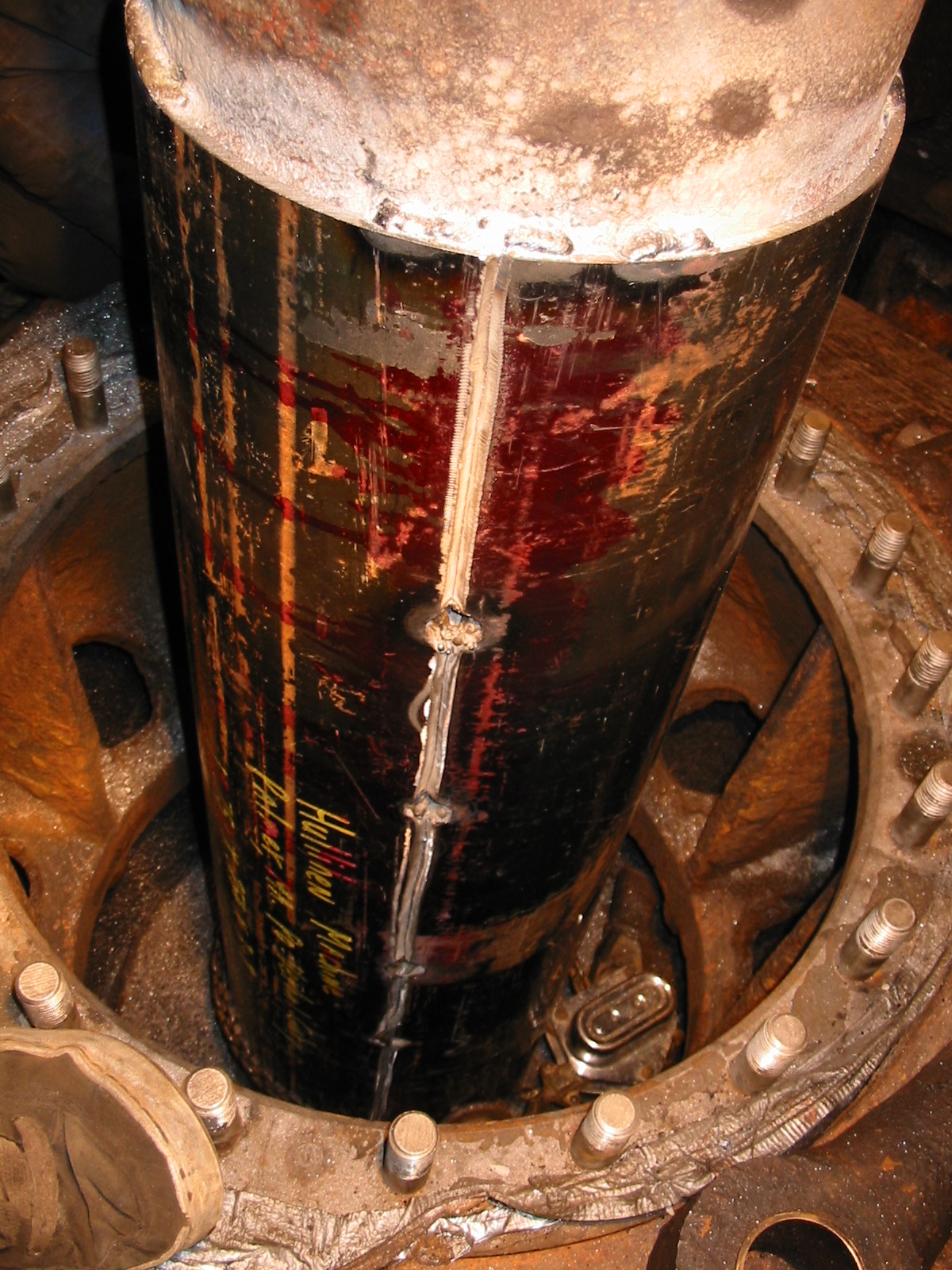 We recently had to repair the barrel stave bearing at the former Keith Paper Company in Turners Falls, MA. The following series of photos depict the process: 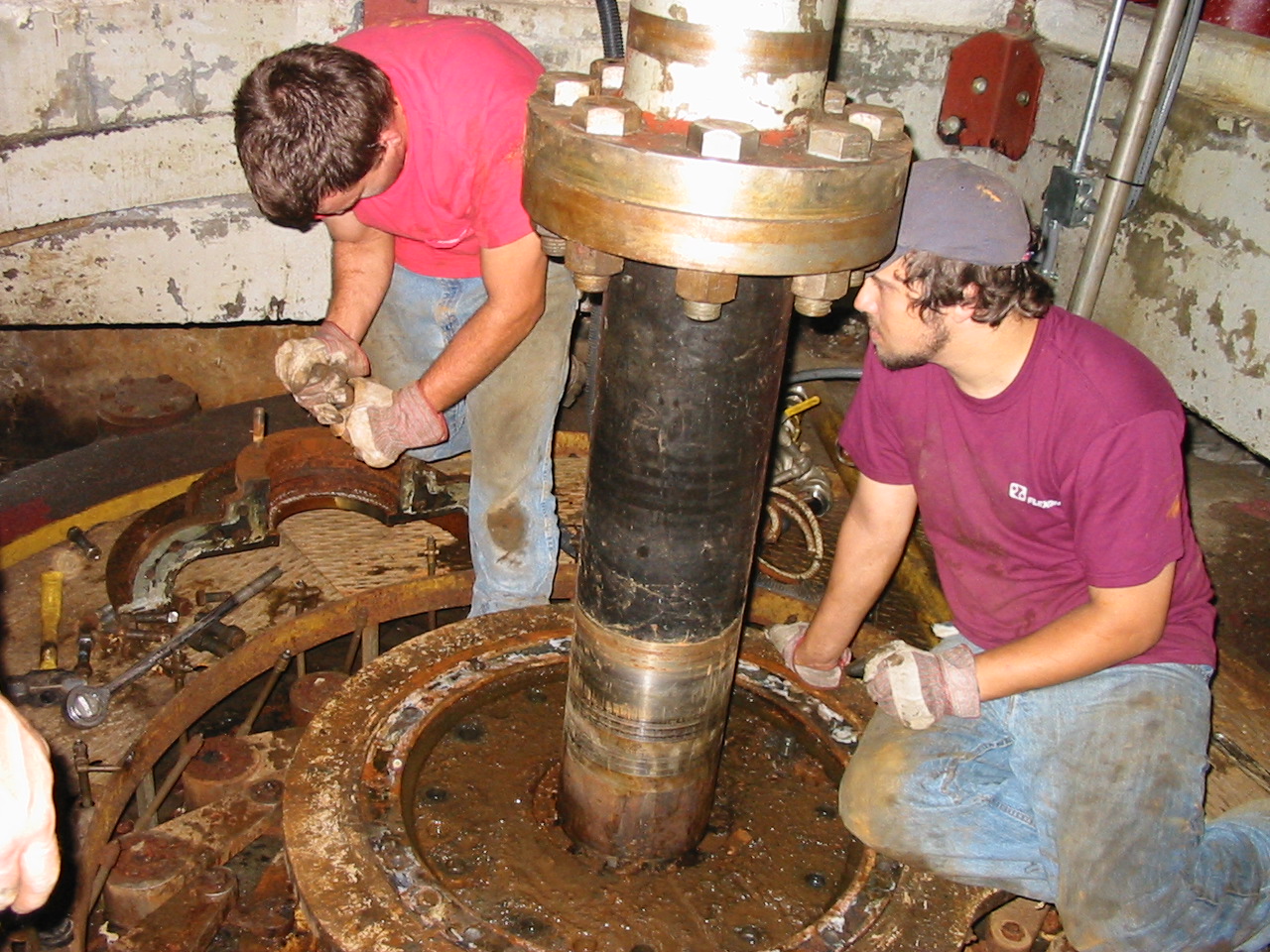 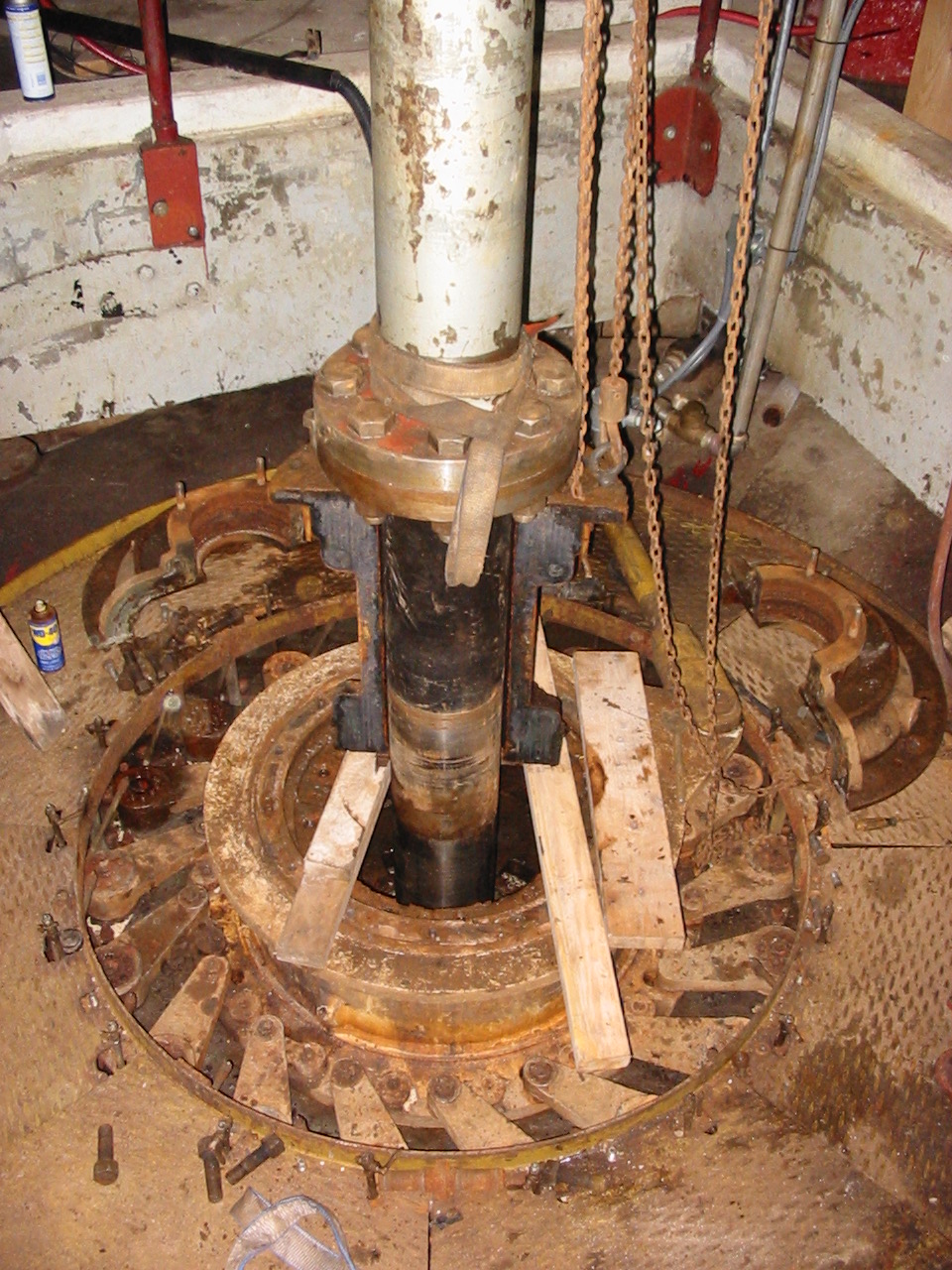 Here we have removed half of the bearing housing and we are lifting out the second half. Notice one half of the stuffing box is sitting to the right on the floor plates. 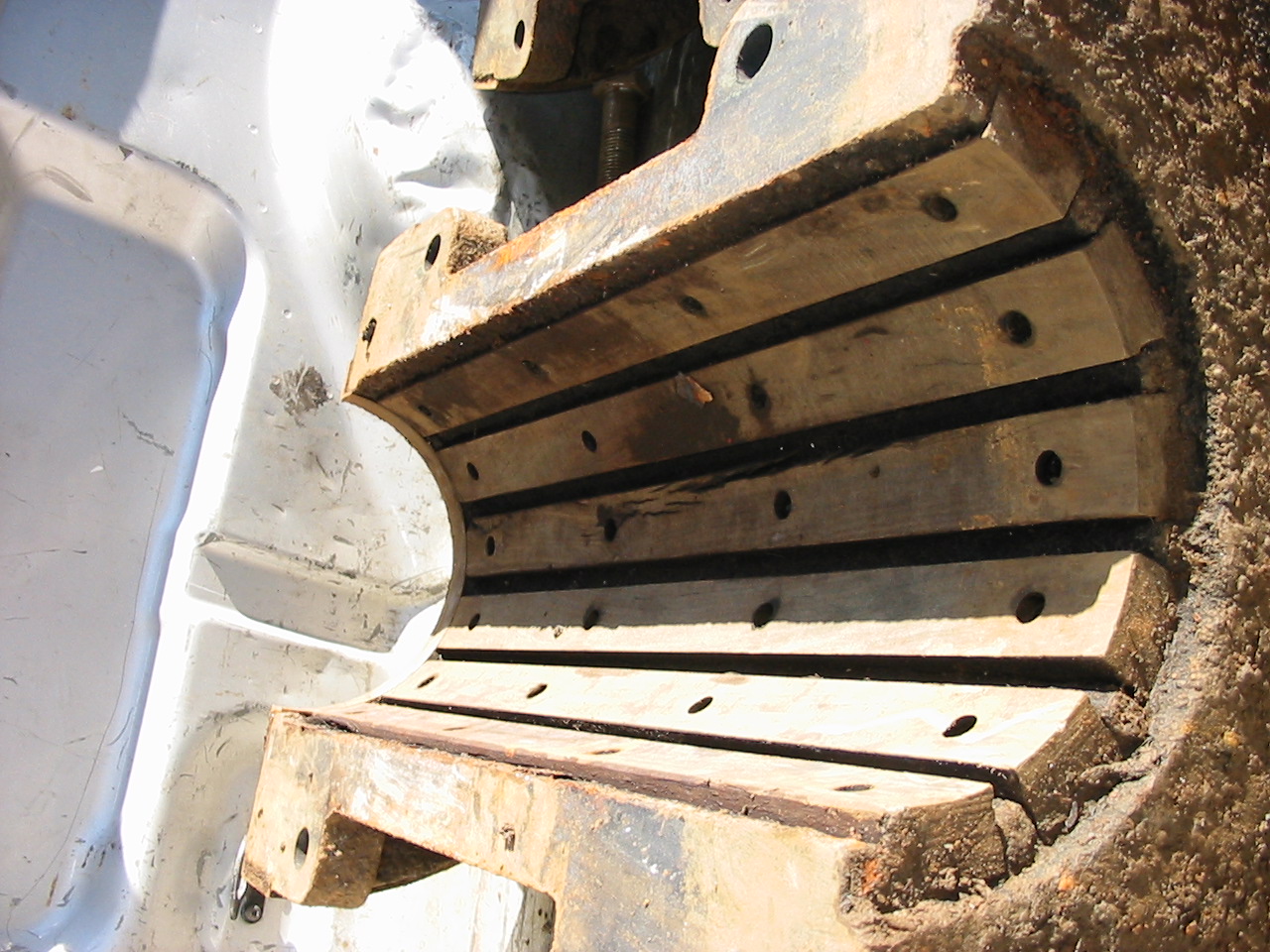 A view of the worn out bearing strips. These strips are non-adjustable. The round holes contain bronze screws that hold the strips in place. If you look closely at the top of a stripee the dove tailed shape. 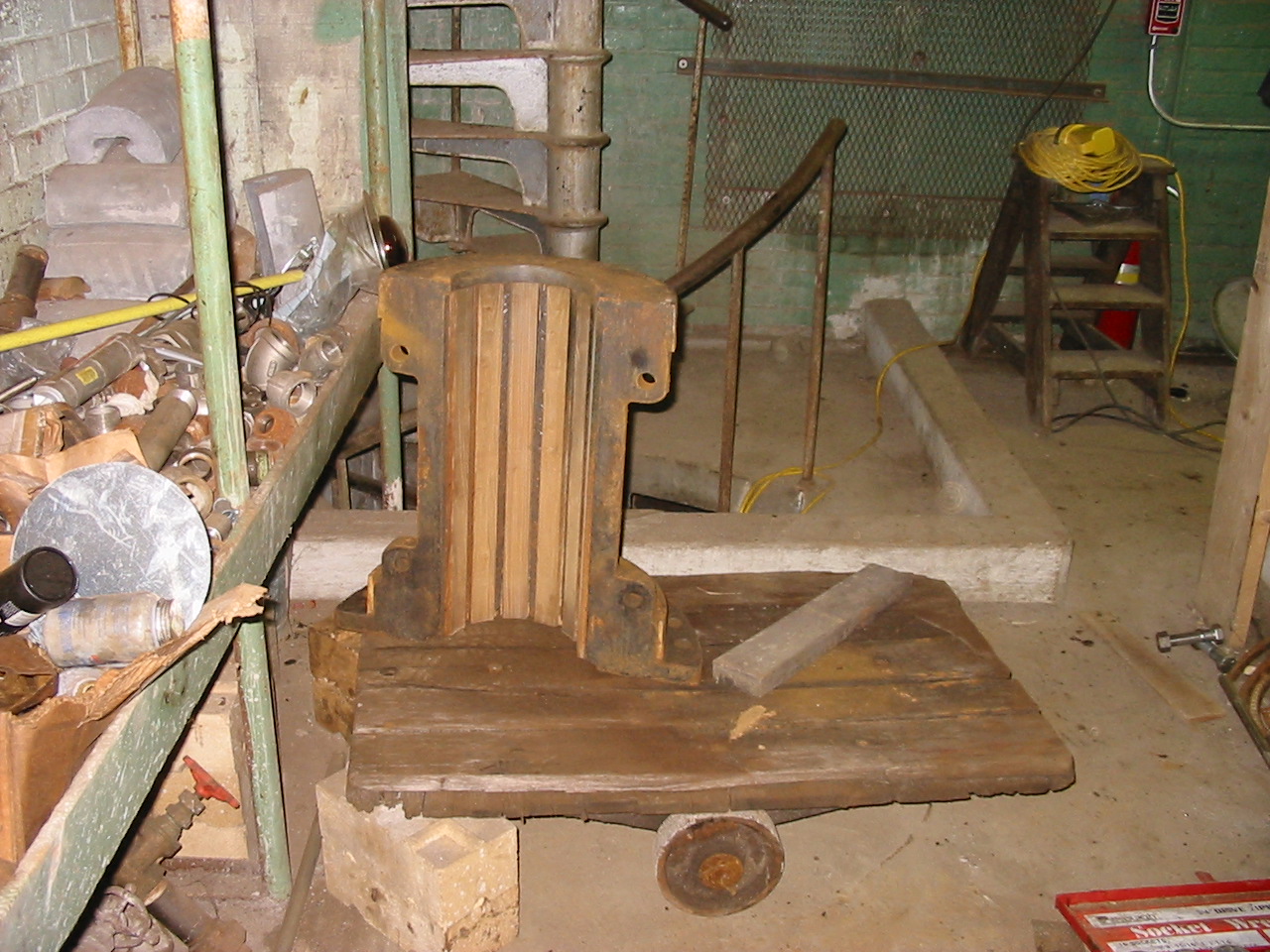 Another view of the barrel stave bearing. 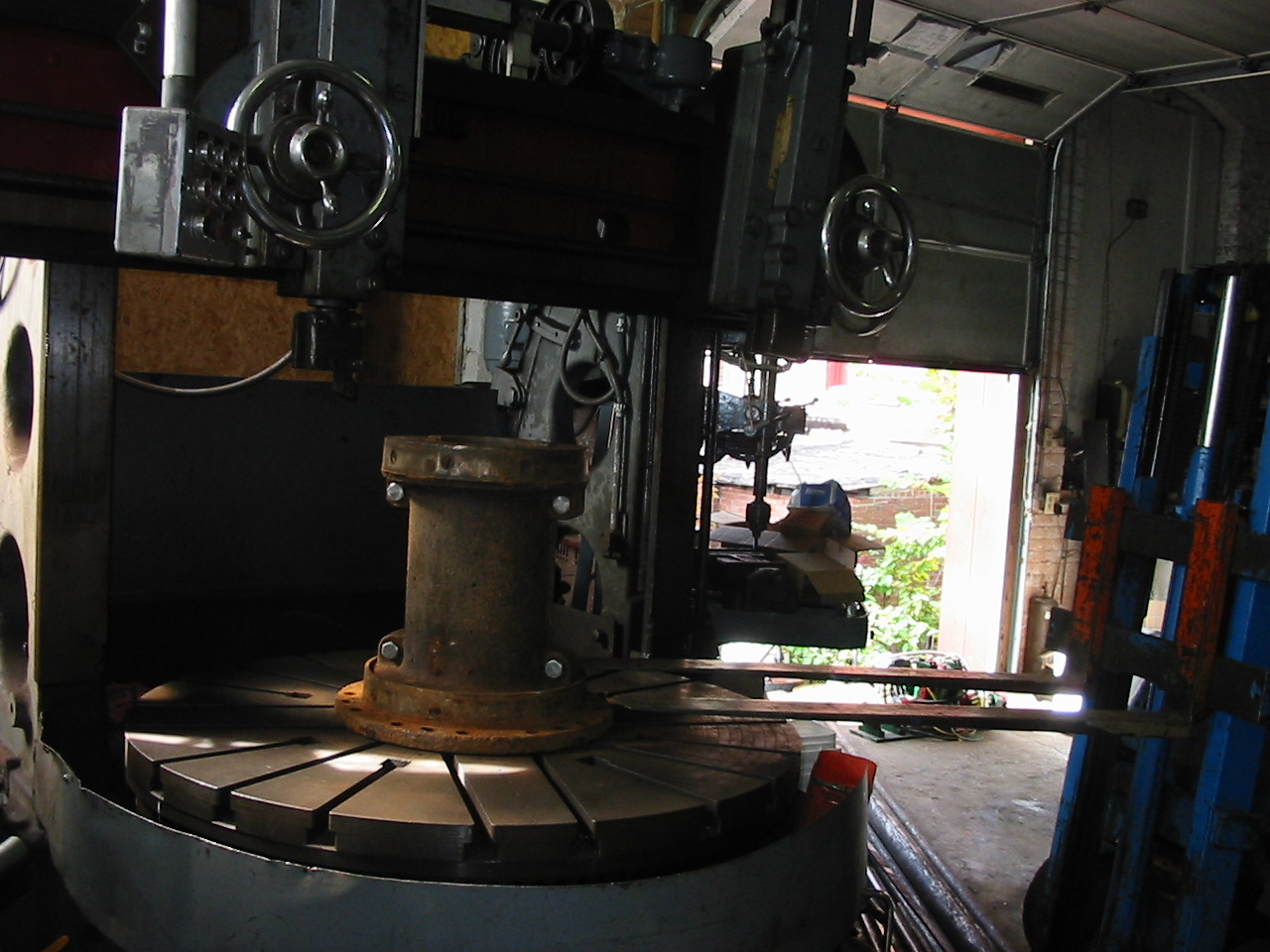 We have just lifted the completed bearing assembly onto the Bullard vertical turret lathe to be turned. 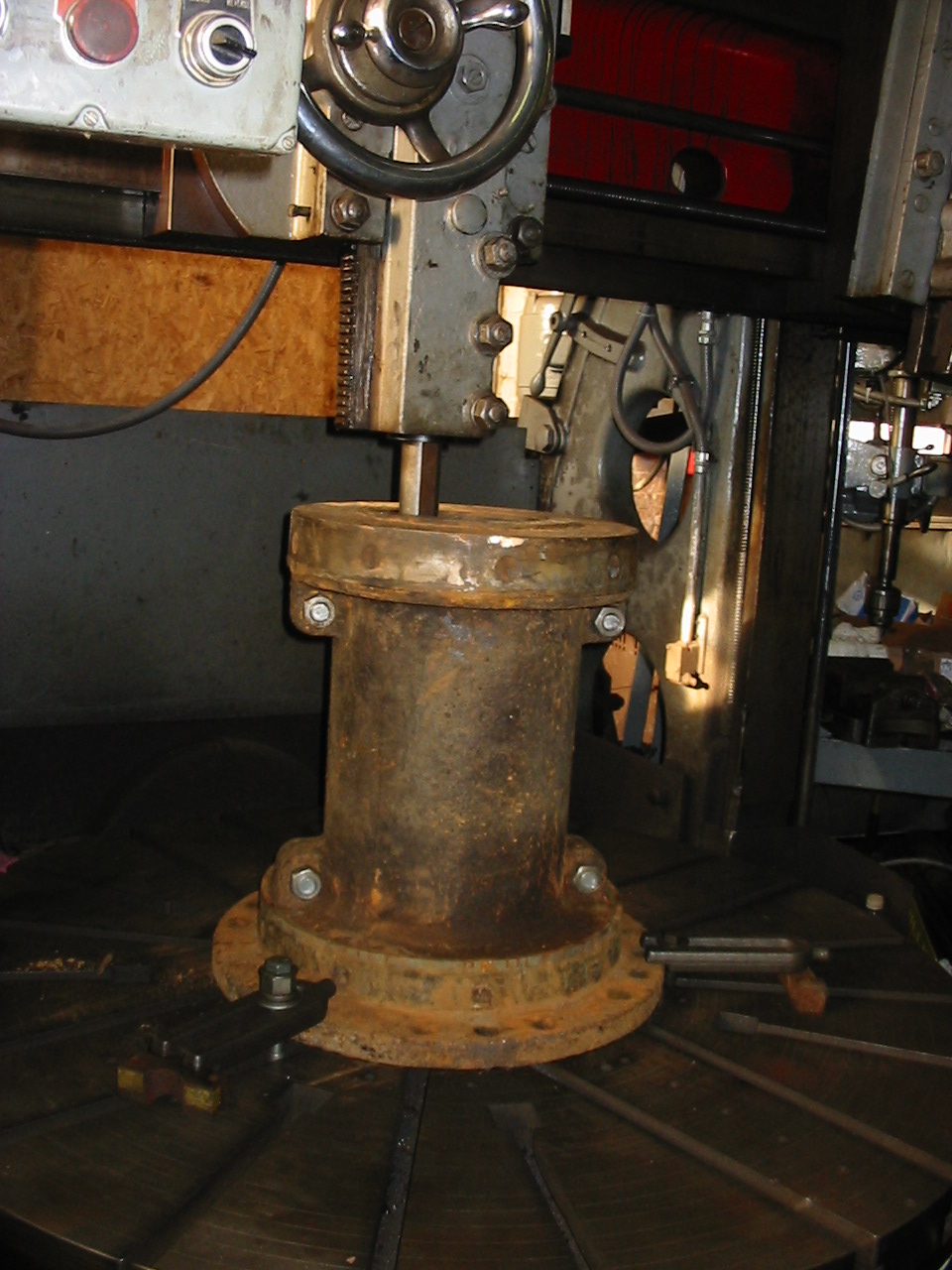 Here we have already inserted and screwed down the new strips. We have clamped the assembly onto the chuck of our 60 inch Bullard. The Wizard is about to bore the inside of the wooden strips to 8 inches internal diameter. 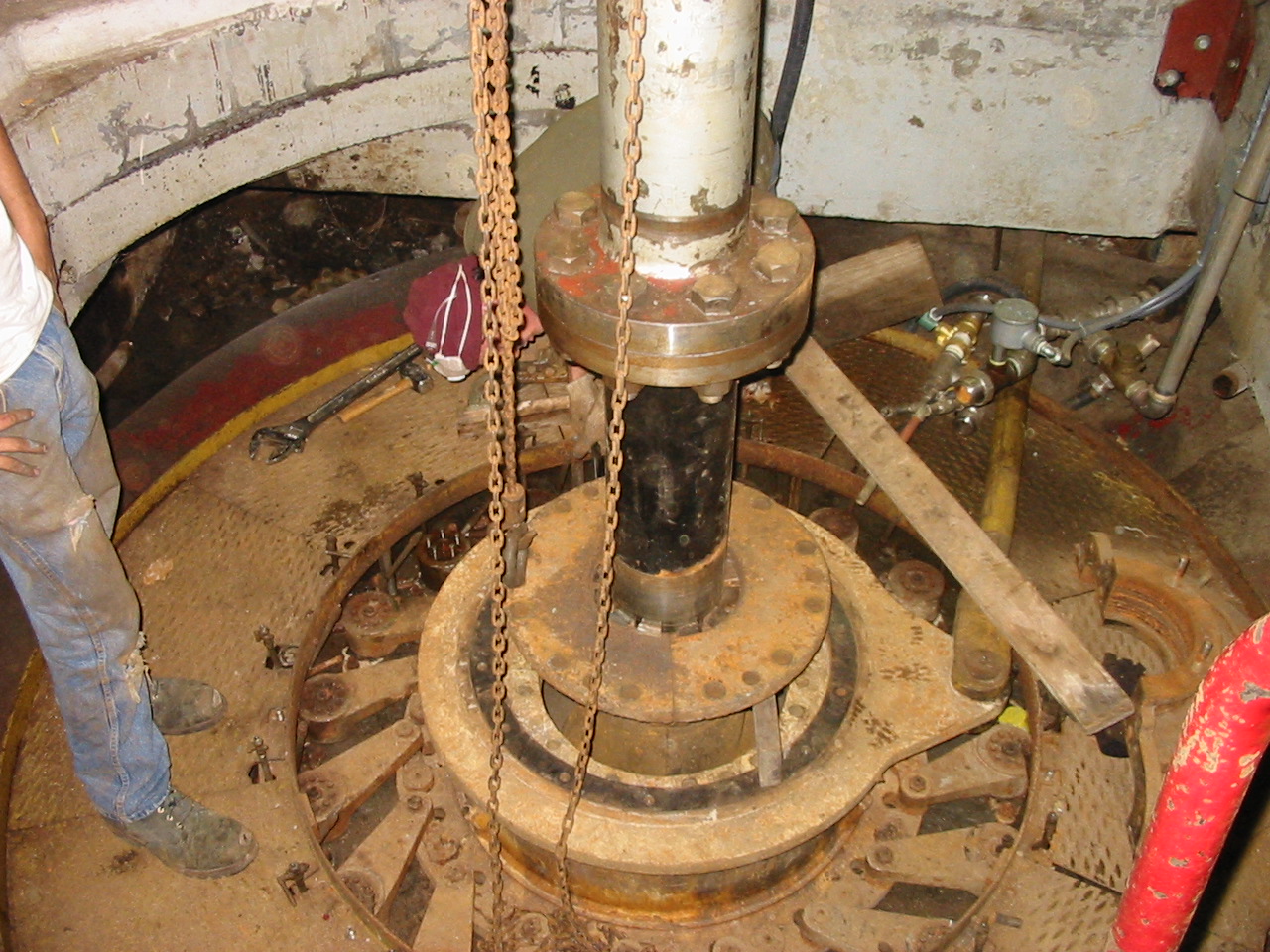 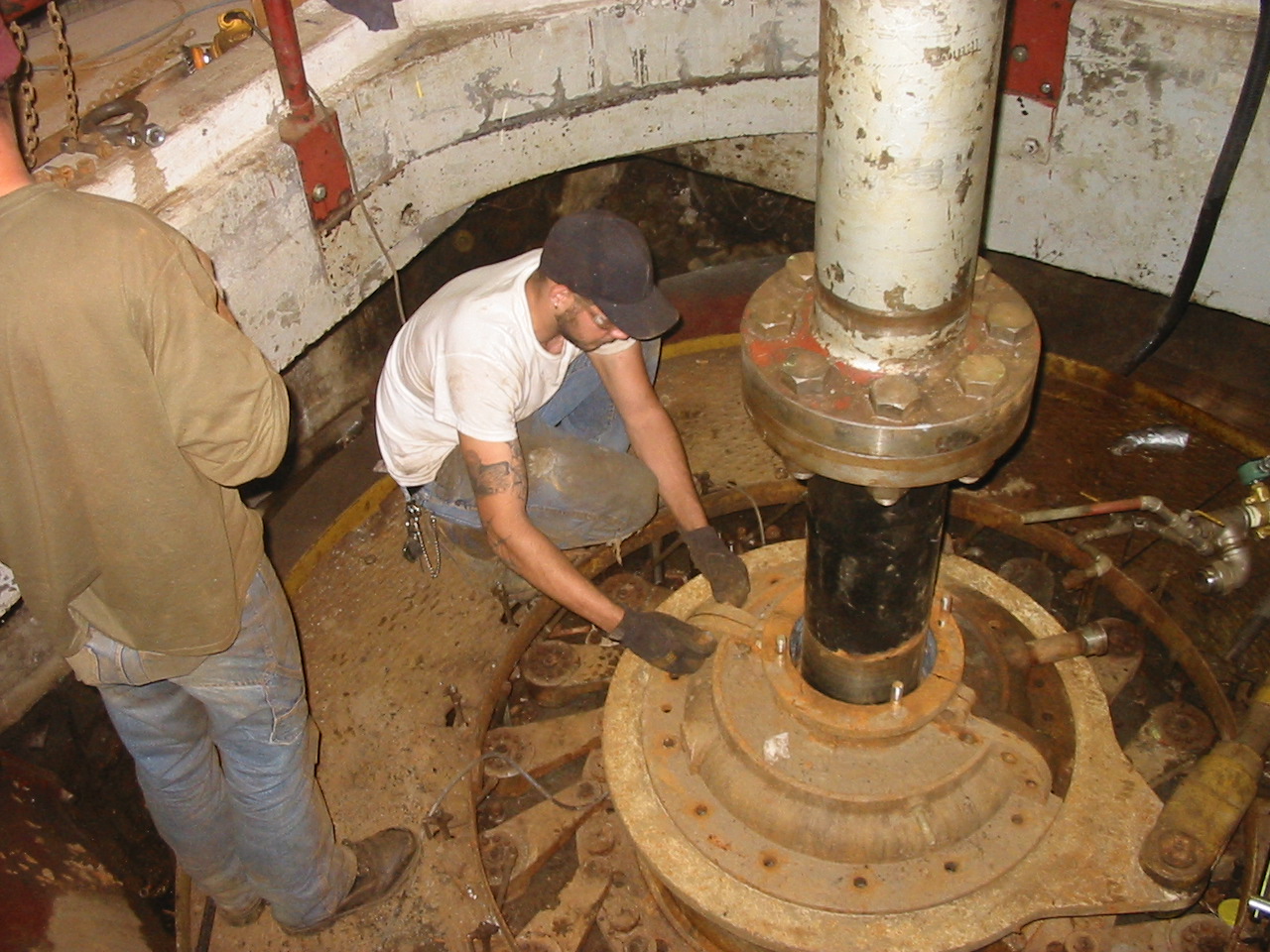 Here Joe is installing the stuffing box. Note the 2 inch stainless steel pipe that is used to flood the bearing stave chamber. 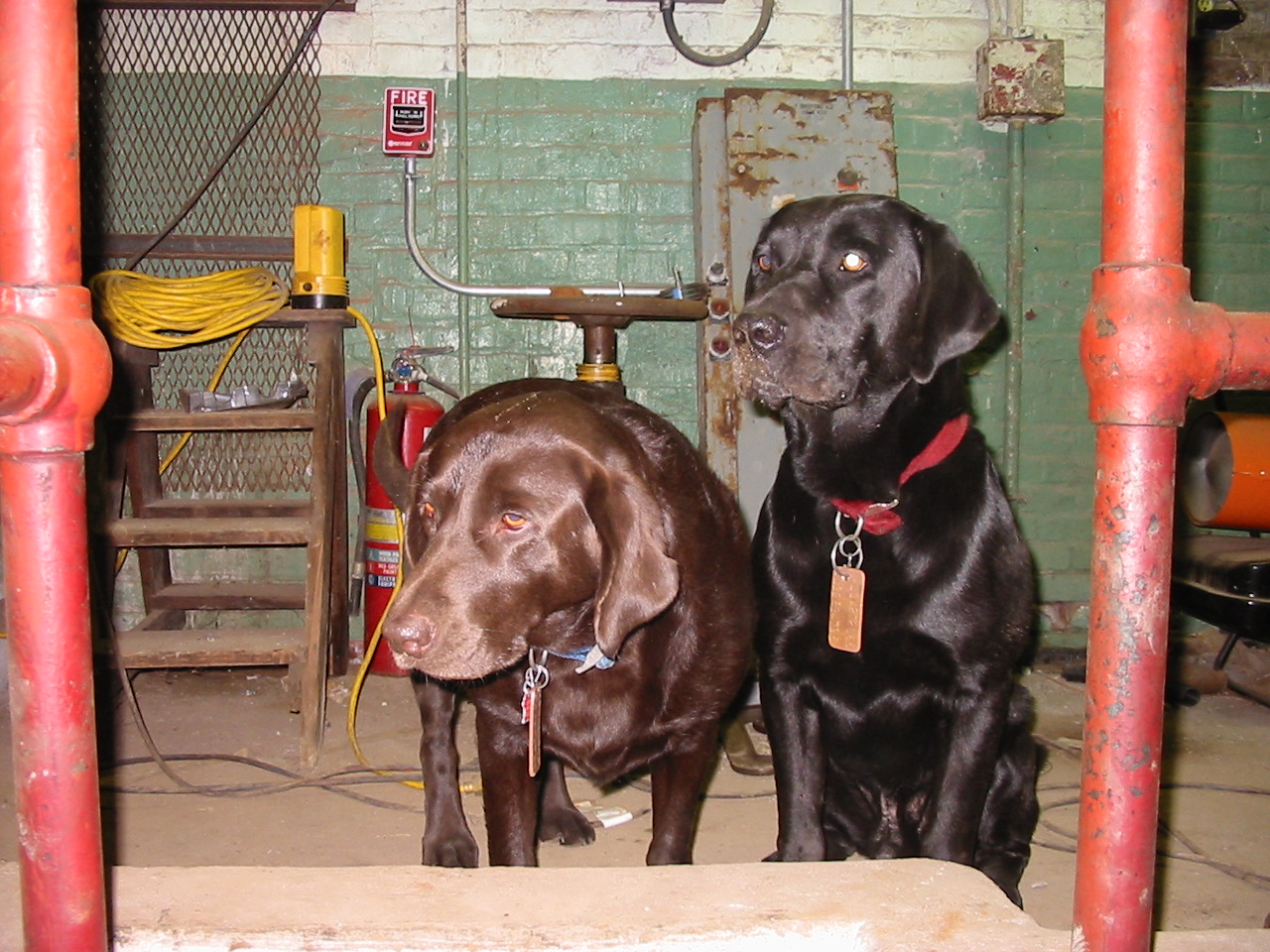 Here are our faithful supervisors. At first, they were barking out orders like a couple of dogs. By this time they were wondering when they could go home!!!